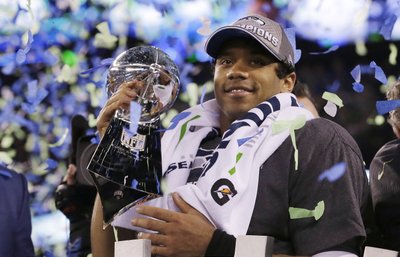 Super Bowl XLVIII started out bad for the Denver Broncos. The Seattle Seahawks made sure it got worse.

Seattle romped 43-8 by playing a suffocating defense and taking advantage of four Denver turnovers, including two interceptions thrown by quarterback Peyton Manning, the NFL’s most valuable player for the season.

On the first play from scrimmage, a bad snap went sailing past Manning and landed in the end zone for a safety, giving Seattle a 2-0 lead without running a play. Denver didn’t score until the third quarter, when the game was out of reach.

Seattle’s defense was so strong that Denver managed only 27 yards rushing, compared with 135 for Seattle. Manning went 34 for 49 to gain 279 yards in the air, but most passes were for short yardage with his receivers quickly taken down. His counterpart, Russell Wilson of Seattle, went 18 for 26 to gain 206 yards and score two touchdowns.

Seattle won its first Super Bowl in franchise history. Manning was thwarted in his quest for a second Super Bowl ring.

After the safety, Seattle kicked two field goals, and Marshawn Lynch scored on a 1-yard run for a touchdown. The Seahawks’ Smith intercepted Manning’s second interception and returned it for another touchdown.

The second half started out bad for Denver, with Seattle’s Percy Harvin running the opening kickoff back for a touchdown.

Jermaine Kearse caught a 23-yeard pass from Russell Wilson with 2:58 left in the third quarter for another touchdown. Wilson threw his second scoring strike to Doug Baldwin with 11:45 left in the fourth.

Just before the third quarter ended, Denver got onto the scoreboard when Manning threw a 14-yard pass to Demaryius Thomas. Denver went for a two-point PAT to make the score 36-8.

Denver, led by the 37-year-old Manning, has the NFL’s best offense, statistically, but never got moving Sunday.

Richard Sherman, the Seattle defense player who mocked San Francisco after winning the NFC championship, was never really challenged. He left with an injury in the fourth quarter.

Though the game didn’t experience the blackout that hit last year’s Super Bowl, fans in Los Angeles had their own visual blackout.

Fans watching the game on KTTV, KCAL and KTLA lost cable service for a period and missed part of the second half and the halftime show, starring Bruno Mars and the Red Hot Chili Peppers. Time Warner cable said in a tweet that the issue was resolved before the end of the game.

Anticipated cold weather was not a factor in the game being played in East Rutherford, New Jersey, the first cold-winter city to host the big game in an outdoor stadium.

For a few days early last week, there was talk that the NFL might have to change its Super Bowl kickoff time by hours or even a day. But the temperatures were in the mid-40s when the game started.