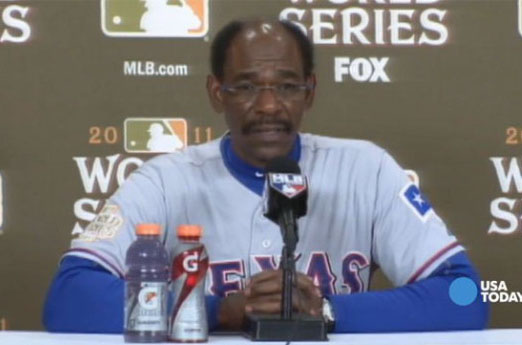 The mystery around the resignation of Texas Rangers GM Ron Washington continues.

Ron Washington, the only manager to lead the Texas Rangers to the World Series, resigned Friday because of an undisclosed personal matter, Washington and the team announced.

“Today, I have submitted my resignation from the job I love – managing the Rangers – in order to devote my full attention to addressing an off-the-field personal matter,” Washington said in a statement. “As painful as it is, stepping away from the game is what’s best for me and my family.”

In 2010, Washington admitted to testing positive for cocaine before the All-Star break in July 2009. The test was administered by Major League Baseball. He offered to resign as manager, but he remained in the position and was not subject to any discipline by MLB or the Rangers.

General manager Jon Daniels said Friday that Washington’s resignation was not the result of drug use.

“While we don’t want to touch on any of the specifics, Ron has given us permission to say this is not drug related,” Daniels said.

According to Daniels, the move was finalized Friday, although the team was aware of the situation for a few weeks. When asked if Washington considered taking a leave of absence, Daniels said, “We looked at a variety of different things. Ultimately this was right for him.”

Added Daniels: “I understand knowing a little bit more about what’s going on why he needs to be doing what he’s doing. I respect that.”

Washington was in his eighth season as the Rangers’ manager, compiling a 664-611 record and winning the American League pennant in 2010 and ’11, when they were within one strike of beating the St. Louis Cardinals to capture the World Series.

This season, though, the Rangers have struggled with injuries and plummeted to last place in the American League West with the worst record in baseball at 53-87.

“This is in no way related to the disappointing performance of the team this season,” said Washington, 62, who had one year remaining on his contract. “We were already discussing 2015 and looking forward to getting the Rangers back to postseason contention.

“I deeply regret that I’ve let down the Rangers organization and our great fans. Over the past eight seasons, it’s been a privilege to be part of some of the best years in club history and I will always be grateful for the opportunities I’ve had here, and for the great management, players, and coaches who have made our time here a success. Thank you for respecting my privacy.”

Daniels confirmed that the team was planning on Washington remaining as manager despite a disappointing season.

“While we are disappointed, we accept Ron’s decision and are grateful for his many contributions to the Rangers organization over the last eight years,” Daniel said in a statement. “This has certainly been a difficult season for our major league club in terms of on-field performance, but we were looking forward to moving ahead with Ron as our manager in 2015.”