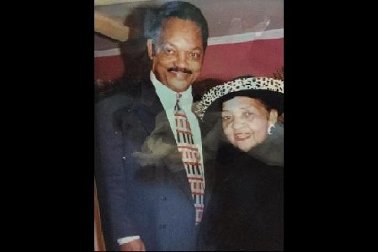 GREENVILLE, S.C. —The Rev. Jesse Jackson’s mother, Helen Burns Jackson, has died Monday morning while in hospice care in Greenville, according to a Greenville County councilwoman, She would have been 92 in November.

“I’ve know the family for years,” Greenville County Councilwoman Xanthene Norris said. “When I first met her, she was a member of Springfield Baptist. She was a beautiful person with a beautiful voice.”

“She will always be known for how well she stuck by her son and kept him going,” she said. Jesse Jackson was born to Burns and her married neighbor, Noah Louis Robinson, a former professional boxer, in 1941.

When Jesse was 2 years old, his mother married Charles Henry Jackson, a post office maintenance worker who adopted Jesse when he was 16.Jesse was given his adoptive father’s last name, but he maintained a close relationship with Robinson and considered both men to be his father. Robinson died in Greenville in 1997. Jesse Jackson’s stepfather has also died.

Jackson talked with WYFF News 4’s Nigel Robertson last Tuesday. He said, “Mom is hanging on. She was on life support. Now she is on heavy medicine to keep at ease. It’s a very tense moment, but yet we thank God for her.”

Monday afternoon, Jackson tweeted: “My loving mother Mrs Helen Jackson has made her transition to be with God. My family thank you for your love & prayers.”

Helen Burns Jackson will be remembered Sunday, from 6 to 9 p.m. in a musical celebration at Springfield Baptist Church at 600 E. McBee Ave. in Greenville. Her service was held Monday at 11 a.m. at the church.