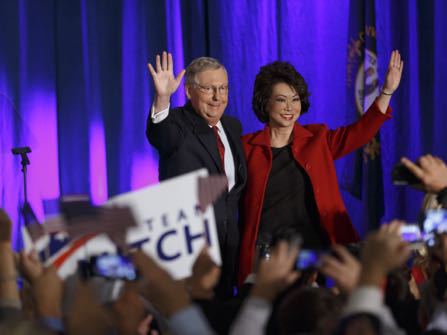 The Republican Senate leader, Mitch McConnell, dispatched Democratic challenger Alison Lundergan Grimes in Kentucky after a $78 million campaign of unrelieved negativity. Voters are “hungry for new leadership. They want a reason to be hopeful,” said the man now in line to become majority leader and set the Senate agenda.

Republicans also picked up seats in West Virginia, South Dakota and Montana, where Democrats retired. They needed a net gain of six seats in all to end a Democratic majority in place since 2006.

With dozens of House races uncalled, Republicans had picked up nine seats in Democratic hands, and given up only one.

Obama was at the White House as voters remade Congress for the final two years of his tenure. With lawmakers set to convene next week for a postelection session, he invited the leadership to a meeting on Friday.

A shift in control of the Senate would likely result in a strong GOP assault on budget deficits, additional pressure on Democrats to accept sweeping changes to the health care law that stands as Obama’s signal domestic accomplishment and a bid to reduce federal regulations.

There were 36 gubernatorial elections on the ballot, and several incumbents struggled against challengers. Tom Wolf captured the Pennsylvania statehouse for the Democrats, defeating Republican Gov. Tom Corbett.

In a footnote to one of the year’s biggest political surprises, college professor Dave Brat was elected to the House from Virginia, several months after he defeated Majority Leader Eric Cantor in a Republican primary.

Speaker John Boehner of Ohio had little opposition in coasting to a 13th term and is likely to retain his top leadership post.

After years of a sluggish economic recovery and foreign crises aplenty, the voters’ mood was sour.

Nearly two-thirds of voters interviewed after casting ballots said the country was seriously on the wrong track. Only about 30 percent said it was generally going in the right direction.

More than four in ten voters disapproved of both Obama and Congress, according to the exit polls conducted for The Associated Press and the television networks.

Still, a majority of those polled supported several positions associated with Democrats or Obama rather than Republicans — saying immigrants in the country illegally should be able to work, backing U.S. military involvement against Islamic State fighters, and agreeing that climate change is a serious problem.

No matter which party emerged with control of the Senate, a new chapter in divided government was inevitable in a nation marked by profound unease over the future and dissatisfaction with its political leaders.

There was a little good news for Democrats in New Hampshire, where Sen. Jeanne Shaheen was re-elected after a difficult race against former Massachusetts Sen. Scott Brown.

But in Georgia, Michelle Nunn lost to businessman David Perdue, depriving the Democrats of their last best chance to take away a Republican seat. In Kansas, 78-year-old Sen. Pat Roberts fended off a challenge from independent Greg Orman, shutting off another avenue for the Democrats — their last.

Competitive races were yet uncalled in Iowa and Alaska.

There were 36 Senate races on the ballot, although most of the attention went to fewer than a dozen. They drew hundreds of millions of dollars in attack ads in a campaign season estimated to cost more than $4 billion — just for the races for Congress.

Former Republican Rep. Asa Hutchinson was elected governor of Arkansas more than a decade after playing a prominent role in President Bill Clinton’s impeachment and trial, and Florida Gov. Rick Scott won a tough race for a new term.

Not even Democrats claimed a chance to topple the Republican House majority. They spent the campaign’s final days dispatching money to districts where incumbents suddenly found themselves in danger.

Republicans sought to downplay any expectation of large gains. A pickup of 13 would give them more seats in the House than at any time since 1946.

The elections’ $4 billion price tag spending was unprecedented for a non-presidential year.