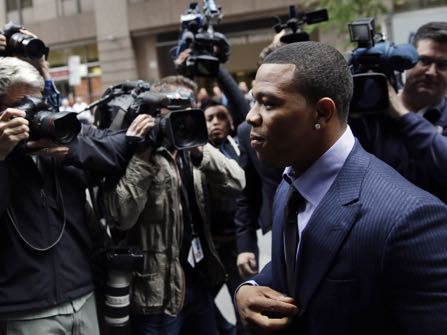 Former Baltimore Ravens running back Ray Rice will reportedly sit down with Today show anchor Matt Lauer for his first television interview since the elevator footage of his domestic incident rocked the NFL and caused his suspension.

According to TMZ, the interview is expected to air sometime between now and Nov. 26, but it’s unclear if Ray’s wife, Janay Rice, will participate in the interview.

Rice hasn’t spoken publicly since the video was released, but did appear at a New Rochelle, N.Y. high school football game in September.

Janay Rice has used social media to express herself, posting pleas for privacy on Instagram after the video surfaced and tweeting about offensive Ray Rice Halloween costumes which showed people in blackface wearing Rice’s jersey and dragging a blowup doll behind them.

Rice is currently appealing his indefinite suspension from the NFL. He argues that the NFL essentially punished him twice for the same offense. Rice had already agreed to therapy, probation and two games after his he knocked his then girlfriend out cold in a Atlantic City, N.J. elevator during an argument. Though the incident initially happened in February, TMZ acquired and aired the video in September.

NFL commissioner Roger Goodell said the NFL had not seen the knockout tape, but that has been questioned by news organizations and others in the Baltimore Ravens camp.