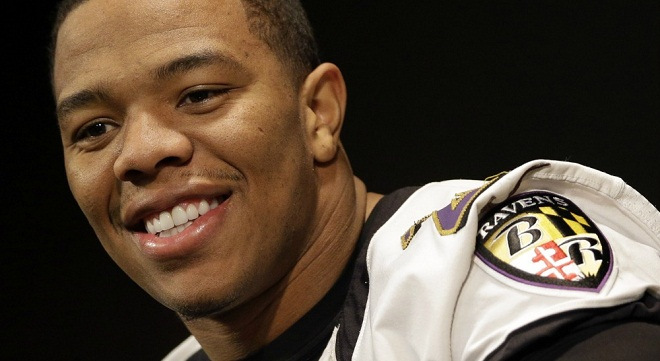 He darts through the slightest of holes en route to four straight 1,200 plus yard seasons. Rising from NFL oblivion to the status as one of the league’s most productive all-purpose performers, Ray Rice never seems to amaze.

That is unless you know the full depths from which the Baltimore Ravens star tailback has had to overcome to finally arrive as he has heading into Sunday’s Super Bowl XLVII showdown against San Francisco.

By age 11, the two men Rice still laments as the most meaningful to ever grace his world laid dead and buried, both at the hands of another and each time in some senseless tragedy that should have never, ever been.

When he was just a year old, his father, Calvin Reed, was killed as he walked home from work in their New Jersey hometown, the innocent victim of a drive-by shooting and aimless triggerman. Just a decade a so later, his cousin, Myshaun Rice-Nichols, whom a still young and impressionable Ray had come to view as a second “father figure,” perished in a St. Patrick’s Day car crash where the driver was later deemed to have been intoxicated.

In between all that and when he was just three years old, Rice also experienced the heart-wrenching tragedy of being the one to discover his beloved grandfather had passed away in his sleep.

Such tragedy help turn Ray Rice into the man he’s become. To this day, the poker-face resolve and unwavering attitude born of all his heartache serve as the primary reason why he’s tatted the initials S.U.P.E. across his right bicep. It just may not be for the precise reasons you might think.

It’s not because all that heartache somehow turned Rice into a reclusive insulate, one naïve enough to belief he’s now willed himself into some sort of super being capable of shielding himself from all his pain.

Instead, it serves as a declaration of his vulnerability, an ode to Myshaun, who went by that very stage name. His first album, Spirituality Uplifting People Everywhere (S.U.P.E.), was set for release just two weeks after he died. Even now, some of the songs on that track are part of the rotation Rice grooves to as he heads for the stadium on game days.

“Everyone faces adversity,” Rice told the New York Post. “It’s still tough to think about it, but there comes a time in your life when you believe everything happens for a reason. My loved ones were taken away from me, but I wanted to be there for my mother. I had to be the man of the house and took the initiative to do the best I could and be the best I could be as both a person and an athlete.”

Beyond that, Rice, now 26, stayed the course and kept the promise he and Myshaun had always made to one another to always be the best they could for themselves and their families. Using football as his gift of opportunity, Rice kept the promise he also made to his mom, a special-needs children schoolteacher, to someday move him and his three sisters out of the projects and into their first home.

“I want to be known as somebody who is always smiling even on a gloomy day,” said Rice, whose still upbeat disposition can be traced to his roots in the church. He grew up attending nearby St. Paul Church, where his aunt is now a pastor and remains a regular voice in his life.

“He was destined to be here,” adds his mom Janet, who often proudly dons her son’s No. 27 at most games. “My sister says he was born with a purpose, and for a purpose, and that’s to do what he’s doing now — play ball. God has given him a gift.’’

But it’s one Ray Rice prides himself on sharing with others. All his generosity is known to extend far beyond the confines of the brick-level home and the high-end vehicles he’s purchased for family.

Every spring, he hosts a football clinic for kids in New Rochelle where he personally drops by with gifts for all and to donate much-needed equipment to his old high school team. “Ray’s very big in this town,’’ said Lou DiRienzo, his former high school coach. “Ray has tremendous personality and a smile that fills up a room. People are endeared to him. From when he was little, he’s a fun guy people like being around. … What he means is a role model.’’

During NFL season, on any given Monday DiRienzo might wander into his office and find Rice already there— not to mention the likes of Ravens’ star quarterback and Rice teammate Joe Flacco.

“It gives kids a sense of hope, that with hard work you can make it,” 31-year-old Jermaine Hollis, who has known Rice since they were young, told the Post. “He’s always motivated kids to do well. He always comes back and shows love.”

Showing love and displaying commitment, it’s part of the reason why even now, caught up in the wave of emotion that is Hall of Fame bound teammates Ray Lewis’ “last ride,” many observers look for Rice to spell the difference come Sunday.

“Ray Rice is the heart and soul of the Ravens’ offense, said former Pro Bowl back and current Yahoo! sports radio analyst announcer Eddie George. “He doesn’t get enough credit for what he means to that team.”

Nor the strife he’s had to endure and overcome just to still be in the game.