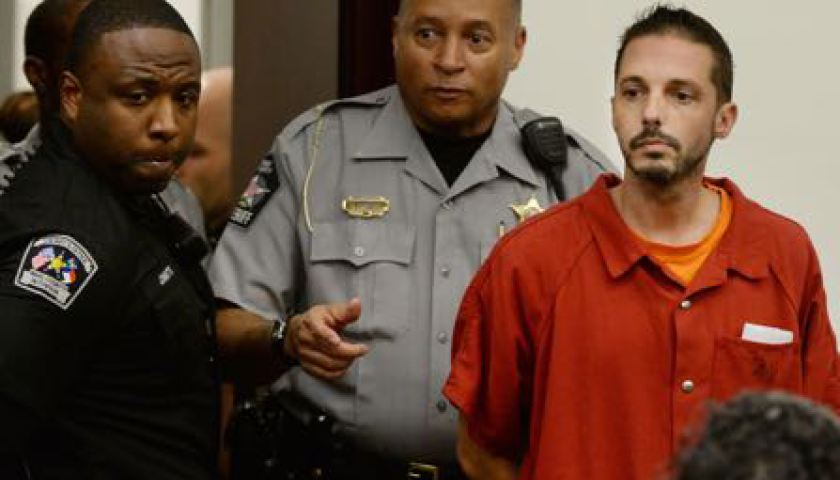 RALEIGH, N.C. (AP) — A white man who apparently called police to complain about “hoodlums” near his house was charged with murder after he shot and killed a black man outside, authorities said.

The shooting happened early Sunday morning when 39-year-old Chad Cameron Copley fired a shotgun from inside his garage and hit the victim, according to a Raleigh Police Department news release. He was arrested hours later, and jail records show the suspect was being held on a murder charge.

A male relative who answered the phone Monday at a listing for members of the victim’s family said they weren’t doing well.

“We’re broken apart torn apart, not doing well. Trying to get our lives back on track the way it was but it’s hard. We lost somebody very special to us,” said the man, who hung up before giving his name.

Police released an audio recording of a 911 call that came in shortly before 1 a.m. Sunday in which a male caller tells a dispatcher that he’s “locked and loaded” and preparing to go outside. Saying there are people outside with guns, he tells the dispatcher he is on neighborhood watch and asks them to send police.

“We’ve got a bunch of hoodlums out here racing,” he says. “I am locked and loaded. I’m going outside to secure my neighborhood.”

The dispatcher then attempts to get a numeric address for the caller, but he declines and hangs up.

About seven minutes later, an upset female caller gives the dispatcher an address that authorities would later identify as Copley’s house. The dispatcher asks what happened.

“I don’t know. I’m upstairs with our children,” the female caller says.

She then gives the phone to what sounds like the same male caller from earlier.

“We have a lot of people outside of our house yelling and shouting profanity. I yelled at them ‘please leave the premises.’ They were showing firearms so I fired a warning shot,” he says. “And, uh, we got somebody that got hit.”

After the dispatcher asks if someone was shot, the male caller responds: “I don’t know if they’re shot or not. I fired my warning shot like I’m supposed to by law. … They do have firearms and I’m trying to protect myself and my family.”

After the dispatcher asks who was outside, the caller says: “There’s black males outside my freaking house with firearms.”

Copley lives in a subdivision in the northeastern stretches of the city where tidy two-story homes sit on tree-shaded lots. The surrounding Census tract is about 60 percent white and almost 30 percent black, with a median household income of about $76,000 — well above the state as a whole, according to 2014 Census estimates.

The news release says Thomas was among people who were outside of Copley’s home, but Hourigan declined to elaborate on where he was when he was shot.

Two people who called 911 tell the dispatcher that the shots came from inside the house, with one giving the address for Copley.

“Someone just got shot,” one of the callers says. “Someone shot him out of his house.”

A dispatcher tells another caller not to move the victim as commotion and profanity can be heard in the background.

“Tell him help’s already on the way,” the dispatcher says.

Copley appeared before a judge during a short hearing Monday, and he was denied bail. The Capital Defender’s Office said it hadn’t assigned an attorney to Copley’s case as of Monday afternoon.