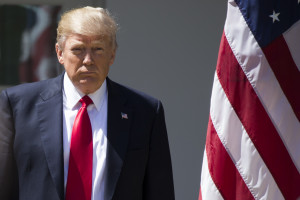 Just when you thought that after a week of embarrassing and vile Tweets, President Trump couldn’t shame this nation any worse— today, the 70-year-old proved otherwise.

Trump continued his tirade against #FakeNews, this time encouraging violence against journalists. On Sunday morning, y’all president posted a Tweet of a doctored video that showed him wrestling the CNN logo.

Yes everyone: This is the way the new leader of the free world behaves.

According to Time, “the video was of an actual 2007 staged spectacle in a wrestling arena, when Trump, then a reality TV star, brought WWE head Vince McMahon to the ground in their ‘battle of the billionaires.’” Instead, this new version edited with CNN’s logo, as opposed to McMahon’s face.

#45 hasn’t bitten his tongue about his disdain with the way mainstream media has covered him since he threw his hat into politics. That negative press has only exacerbated since he took office—and CNN seems to be his current obsession.

The cable news network lashed out against the president’s recent Tweet, releasing the following statement: “It is a sad day when the President of the United States encourages violence against reporters. Clearly, Sarah Huckabee Sanders lied when she said the President had never done so. Instead of preparing for his overseas trip, his first meeting with Vladimir Putin, ‎dealing with North Korea and working on his health care bill, he is instead involved in juvenile behavior far below the dignity of his office. We will keep doing our jobs. He should start doing his.”

Of course, #45 sent a lackey to defend his juvenile and irresponsible behavior on the Sunday Morning talk shows.

The New York Times reported that Trump’s homeland security adviser, Thomas Bossert told Martha Raddatz of ABC News, “No one would perceive that as a threat. I hope they don’t.”