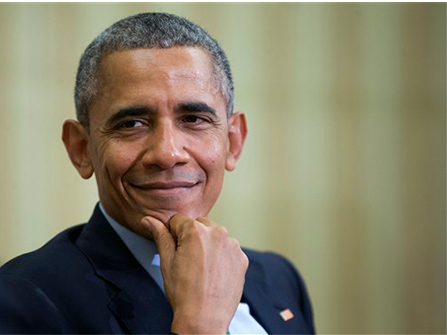 The highly esteemed Howard University snagged POTUS for its 2016 commencement address, the institution’s president announced this morning. The ceremony will take place on May 7 and POTUS will of course receive a Doctor of Laws degree, Howard U.’s highest honor.

“It is an extraordinary honor and privilege for the Howard University community to welcome President Barack H. Obama to our campus to deliver the 2016 commencement address,” said Howard University President, Dr. Wayne A. I. Frederick. “The President’s commitment to education, especially for those who can least afford it, dovetails with Howard’s commitment to provide these same students with a rigorous, intellectually-stimulating, and academically-challenging educational experience. As we look into the not so distant future, Howard will commemorate its 150th Anniversary in March 2017, emboldened by a legacy of addressing disparities that are inextricably intertwined with this nation’s legacy of equality and inclusivity. President Obama’s own legacy gives the Howard Community great expectations for the leadership footprint it will leave on America and the globe,” added Frederick.

“The Howard University community offers its congratulations to all of the honorary degree recipients, who honor us with their acceptance of the awards. We are extremely pleased that President Obama has accepted our invitation to receive the honorary Doctor of Laws degree and address the class of 2016. His will be compelling words of encouragement for our students as they move forward with their commitment to truth and service,” said Stacey J. Mobley, Esq., Chairman of the Howard University Board of Trustees. “President Obama’s world leader insights and his commitment to justice, equality, and inclusivity will make this year’s commencement ceremony historic and uniquely special for everyone who has contributed to Howard University’s legacy.”