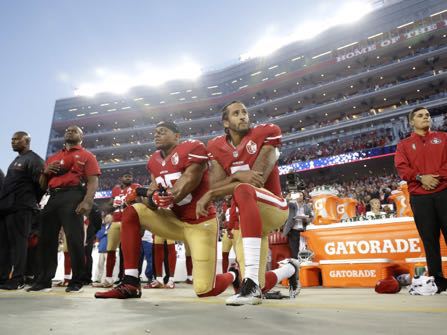 According to a new NBC/Wall Street Journal poll, opinions about the NFL’s national anthem protests are as divided as red state/blue state politics.

On NBC’s Meet The Press host Chuck Todd revealed a poll has been done. The results that say that only 43% of voters believe kneeling during the national anthem is an appropriate way to protest racial inequality, while the majority, 54%, say it is not appropriate.

What’s more interesting about the poll results, though, are the political divisions reflected in those attitudes. Todd claimed 72% of Democrats say kneeling is appropriate, versus 23% who say it isn’t. For Republicans, the numbers are basically reversed, with 10% appropriate, 88% not.

Drilling down further, the poll says there is a racial divide by a margin of 70 to 28, with African-Americans claiming kneeling to protest racial inequality is appropriate. Whites say no by a 20-point margin, 58/38.

The National Football League regular season opens Thursday in Philadelphia, as the Super Bowl champion Eagles take on the Atlanta Falcons. The NFL and the NFL Players Association have yet to reach a compromise on what constitutes proper behavior during the anthem. Both sides agreed to a moratorium on any punishments during the pre-season, but have yet to come up with a solution.

The NFL implemented new rules in May that call for players on the field to stand at attention during the national anthem, but also gave them the option of staying in the locker room if doing that would violate their individual beliefs. Players grumbled about the rule, leading to the current stalemate in search of a compromise.

On Meet the Press, Matthew Continetti – editor-in-chief of The Washington Free Beacon – noted that President Trump, like it or not, is on the majority side of the issue.

“Democrats tend to view populism strictly through an economic lens,” Continetti said. “But they have to understand that there’s also this cultural lens that has to do with symbols of American patriotism, kind of the American story. Trump is very effective at seizing on those symbols, polarizing them and rallying his base and some of those independents to his side.”

In other news on Colin Kaepernick, though he does not currently have an NFL team, he does have a new Nike deal. TMZ is reporting that Kaepernick will have a new shoe and campaign for the sneaker and apparel company, although they are the suppliers for several NFL teams. 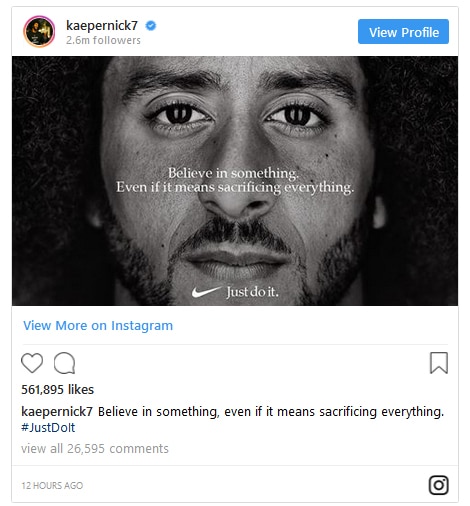 According to TMZ, Colin will be the face of Nike’s 30th Anniversary campaign and Nike will make a significant contribution to Kaepernick’s “Know Your Rights” foundation.