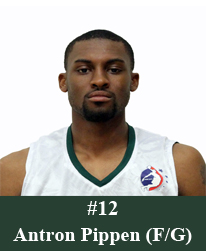 Antron Pippen has been chosen as one of the top 7 players to represent the WBA in the Summer League Showcase in Las Vegas, NV July 8 – 12, 2013. University of Georgia standout Jeremy Price (PF) was also selected to represent the WBA’s best in the showcase.

The participating teams are made up of each league’s prime time best players. This event features 80 players comprised of the most talented players in the North American professional basketball market, outside the NBA. The objective of the event is to provide opportunity for talented minor league players to showcase their skills to scouts in the international basketball community.

The event will be sponsored by Global Basketball and they will supply scouts and executives from all over the international basketball world — Israel, Germany, Japan, Italy, Canada, Malaysia, Norway, England, and many others.

Pippen is a member of the WBA’s (World Basketball Association) Upstate Heat and is presently having a record setting season.

Let’s wish Pippen and his team mate Price the best!

The top players of the WBA Team consists of :