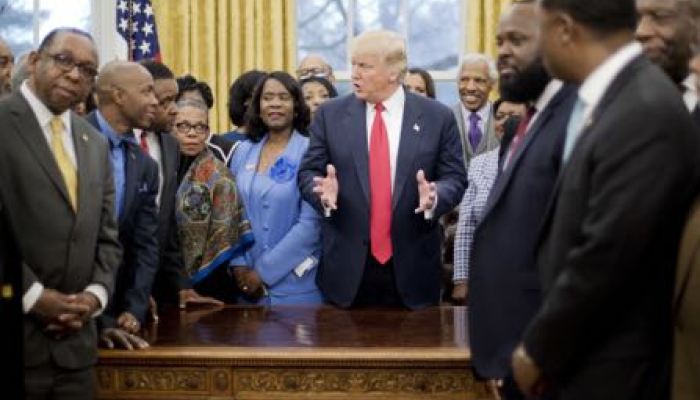 WASHINGTON (AP) — The nation’s historically black colleges and universities are pushing for President Donald Trump to set aside more federal contracts and grants for their schools, and take a greater hand in their welfare by moving responsibility for a key program for those colleges to the White House.

The presidents of the nation’s 100-plus HBCUs, pressing their case for greater attention from the new Republican-controlled government, met with Trump briefly in the Oval Office and later with Vice President Mike Pence. On Tuesday, they planned to meet with GOP lawmakers.

“Know that beginning today, this administration is committed to ensuring that historically black colleges and universities get the credit and the attention they deserve,” Pence said after the meeting. “Our administration at the president’s direction is working to find new ways to expand your impact so that more students, especially in the underserved communities of this country, have a chance at a quality education.”

The college presidents, as well as the United Negro College Fund, the Thurgood Marshall College Fund and other HBCU advocates, planned to express their support for migrating the White House Initiative on HBCUs from the Education Department to the White House itself.

Such a move would give the initiative “greater impact for our institutions,” said Johnny Taylor, head of the Thurgood Marshall College Fund, a nonprofit organization which has supported public historically black colleges and universities since 1987.

“Anything that the Trump administration could do to channel more federal dollars in form of grants and contracts to and through the HBCUs would really benefit our institutions and in many cases, our communities, as well,” said Mickey L. Burnim, president of Bowie State University, in Bowie, Md.

There were more than 231,000 students enrolled at black colleges and universities in 2014, according to the National Center for Education Statistics. Almost 80 percent were black.

Total HBCU enrollment declined from 326,614 to 294,316 between 2010-2014, according to the latest information available from National Center for Education Statistics. The percentage of black college students attending a historically black college or university also dropped from 18 percent of the overall total in 1976 to 8 percent in 2014.

Trump got 8 percent of the African-American vote in his presidential election.

The UNCF and the Marshall fund also have been lobbying for the new president to devote some direct attention to the well-being of HBCUs. Trump is expected to soon release an executive order aimed at helping black colleges and universities. One of Trump’s most visible African-American aides, Omarosa Manigault, holds degrees from two of these colleges: Central State University in Ohio and Howard University in Washington, D.C.

White House press secretary Sean Spicer said Monday that the White House would likely “look at the various resources throughout the federal government that support HBCUs.”

He said they may look to ensure “there’s a direct pipeline to the president of the United States that those programs are being executed in a way that’s benefiting the future of HBCUs and the various projects and teaching that goes on there.”

It is time for HBCUs to have a more robust discussion with Republicans, Taylor said. In the past, HBCUs leaned heavily on the heavily-Democratic Congressional Black Caucus to defend them in Washington. “In this environment, if you don’t have Republican support, you may not have any support at the federal level,” Taylor said.

Rep. Mark Walker, R-N.C., said it was time for Republicans to step up to help majority-black colleges and universities. North Carolina has one of the nation’s largest HBCUs in North Carolina A&T University.

“We want our tone to match our work, and that means more than just an awareness or lip service,” said Walker, one of the lawmakers behind the meeting Tuesday between the HBCU presidents and the GOP. “We want our actions to speak just as loud.”

The CBC said it was ready to help the Trump administration push through help for the black colleges and universities. They suggested that, as a start, Trump should increase the maximum Pell Grant award for students and double the funding for Pell Grants, or provide two years of free tuition at HBCUs.

“We hope that you and your administration are serious about supporting these schools,” CBC chair Rep. Cedric Richmond, D-La., said in a letter to the White House. “The way to show that you are is to not only talk the talk, but walk the walk. Give these schools the resources and support they deserve and that they and the CBC are asking for.”