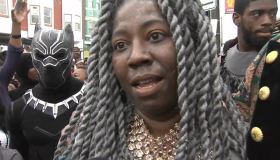 PHILADELPHIA (AP) — A Philadelphia mom who threw a $25,000 Dubai-themed prom for her son last year is throwing a “Black Panther”-themed prom this year complete with an actual black panther.

Saudia Shuler tells WPVI-TV she had a contest this year that asked kids in her North Philadelphia neighborhood to send their report cards and essays explaining why they deserved to have an epic prom send-off.

She had planned to have one winner but ended up picking 24.

Schuler’s celebration Wednesday had African dancers and people wearing custom costumes based on the “Black Panther” movie. She dressed as Queen Mother Ramonda, a character portrayed in the film by actress Angela Bassett.

Schuler says neighbors and friends helped pitch in for the undisclosed price of the celebration, described as costing in the six figures.