Pharrell is mourning the loss of his cousin, 25-year-old Donovan Lynch. Lynch and former Bad Girls Club star Deshayla Harris were among individuals shot and killed in three separate incidents in Virginia Beach, Virginia on Friday (March 26). While Harris was struck by crossfire, Lynch was fatally shot and killed by a Virginia Beach police officer who claimed Lynch was brandishing a handgun.

Lynch died after he was shot in the torso and thigh according to the Virginia Office of the Chief Medical Examiner.

The Grammy Award-winning artist and producer grieved on Instagram on Monday (March 29), eulogizing Lynch while also calling for justice.

“The loss of these lives is a tragedy beyond measure,” Pharrell wrote. “My cousin Donovon was killed during the shootings. He was a bright light and someone who always showed up for others. It is critical my family and the other victims’ families get the transparency, honesty and justice they deserve. Virginia Beach is the epitome of hope and tenacity and, as a community, we will get through this and come out even stronger.” 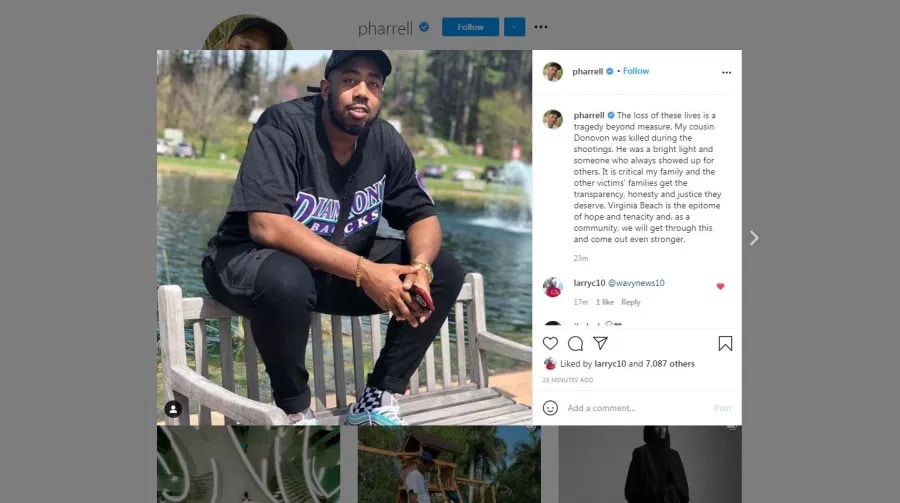 The officer involved in Lynch’s death was placed on administrative assignment during a criminal investigation. There was no bodycam footage discovered during the incident as the unidentified officer failed to activate the camera during his encounter with Lynch.

Investigators from the Virginia Beach Office of the Commonwealth will look into the shooting. A public information officer with Macie Allen, the Office for the Commonwealth’s Attorney, wrote in an email: “The police department conducts their own investigation and provides us with their findings. We then review both investigations and determine whether or not charges are appropriate.”