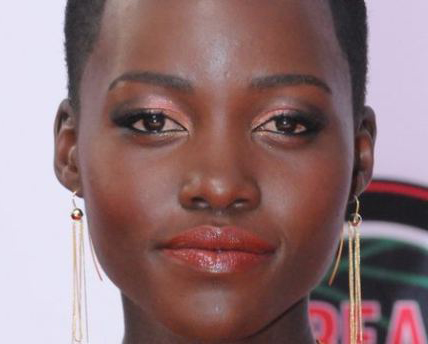 The 12 Years a Slave star and Oscar nominee for Best Supporting Actress confessed that as a young girl, she had wished her dark-hued skin would become lighter.

“I got teased and taunted about my skin,” Nyong’o said, on stage in a ballroom at the Beverly Hills Hotel. “My one prayer to God was that I would wake up lighter skinned. The morning would come and I would be so excited about seeing my new skin that I would refuse to look down at myself until I was in front of the mirror because I wanted to see my face first. Every day I would feel the disappointment of being just as dark as the day before.”

Nyong’o said she tried to bargain with God by vowing to stop eating sugar cubes and to never lose her school sweater again, if she could only see a change in her skin tone. It wasn’t until she discovered Sudanese British supermodel Alek Wek that she began to believe in her own beauty.

“She was dark as night and was in all the magazines and on runways,” Nyong’o said. “My complexion had always been an obstacle to overcome. I couldn’t believe that people were embracing a woman who looked so much like me as beautiful. It was perplexing and I wanted to reject it because I had begun to enjoy the seduction of inadequacy. But a flower couldn’t help but bloom inside of me.”

Nyong’o said she would also like to inspire young women.

“I hope that my presence on your screen and my face in magazines may lead you, young girls, on a beautiful journey,” she said. “That you will feel the validation of your external beauty, but also get to the deeper business of being beautiful inside.”

Essence also paid tribute to Cheryl Boone Isaacs, the first black president of the Academy of Motion Picture Arts and Sciences, who was presented with the trailblazer award by Sidney Poitier and Oprah Winfrey.

The Hollywood visionary award went to filmmaker Ava DuVernay, the first black woman to win best director at the Sundance Film Festival in 2012 for Middle of Nowhere. DuVernay, who directed an episode of the current season of “Scandal,” was presented her honor by actress Kerry Washington.

“Ava has firmly established herself as the gutsiest of storytellers and working with her is so inspiring,” said Washington, who, with one hand resting on her pregnant belly, wiped away tears with the other during DuVernay’s acceptance speech.

The magazine also celebrated the champions of the Civil Rights Act of 1964, as this year marks the 50th anniversary of its signing. Clarence Williams III, Denise Nicholas, Diahann Carroll, Dr. Maya Angelou, Jim Brown and Nichelle Nichols were commended.

Nicholas, Brown and Nichols took the stage to accept their medals after a short video highlighted their activism. “It’s just beautiful that among the fanfare during Oscar week, we are able to honor each other and our work,” said Angela Bassett. “It is undeniable the imprint that we’ve made.”