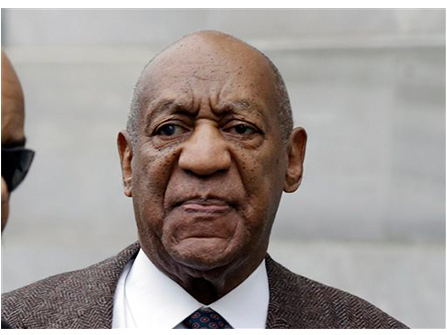 NORRISTOWN, Pa. (AP) — The first accuser to testify at Bill Cosby‘s retrial described the comedian as “a serial rapist” Wednesday, stunning the courtroom as she parried with his lawyers.

In her second day on the witness stand, Heidi Thomas, a Colorado music teacher, told jurors she came forward with her allegations in early 2015 to support other women who have accused Cosby, not for the attention his lawyers say it brought her.

Thomas had testified that Cosby knocked her out with wine and forced her to perform oral sex in 1984 in Reno, Nevada.

She rejected a defense lawyer’s insinuation that she would do anything to help the comedian’s chief accuser, Andrea Constand.

“You’ve made it very clear that you want to help Andrea Constand, haven’t you?” Kathleen Bliss asked.

“I want to see a serial rapist convicted,” Thomas replied.

Thomas is one of five additional accusers who say the comedian drugged and attacked them long before he met Constand, a former Temple University women’s basketball administrator who alleges Cosby gave her pills and then violated her in 2004. He says the encounter with Constand was consensual.

Prosecutors are lining up the additional accusers to make the case that Cosby, once revered as “America’s Dad,” was a Hollywood predator who is only now facing a reckoning after allegedly assaulting Constand at his suburban Philadelphia home.

The women also could help prosecutors insulate Constand from the defense’s contention that she is a “con artist” who preyed on Cosby’s vulnerability after the 1997 killing of his son, Ennis, and then framed him to score a big payday via a $3.4 million civil settlement.

Thomas was a 24-year-old aspiring actress when her agent arranged for Cosby to give her acting tips. She testified that Cosby gave her the wine as they rehearsed a scene in which she portrayed a drunken woman.

She said she remembered feeling sick and wondering, “How did I get here?”

Thomas rebuffed a defense suggestion that she was seeking a share of the spotlight and trying to profit off her experiences. Under cross examination, she told jurors that many of the more than a dozen interviews she gave after going public stemmed from her work to extend the statute of limitations for sex crimes. Thomas has teamed with other Cosby accusers to lobby for longer statutes of limitations, including a successful effort to double Colorado’s to 20 years.

Court opened Wednesday with the defense successfully arguing that jurors should hear about another accuser’s criminal past so they can fully assess her credibility.

State law bars talk of witness convictions more than a decade old, but Gupta argued that Lasha’s conviction should be an exception since her allegations against Cosby date to 1986.

The judge ruled that Cosby’s lawyers can bring it up.

The former model and aspiring actress said she was immobilized and unable to speak as Cosby assaulted her after giving her a pill he described as an antihistamine. Her lawyer, Gloria Allred, said the defense is trying to smear Lasha.

The defense has urged jurors to ignore the other accusers, calling their allegations irrelevant to the charges involving Constand, who turned 45 on Wednesday.

“I just wanted her to know that everything that was being said about her and about us, that there was somebody out there who knew she was telling the truth,” Thomas testified.

Cosby, 80, is charged with three counts of aggravated indecent assault, each punishable by up to 10 years in prison. His first trial last year ended in a hung jury.

As they began building their case against Cosby, prosecutors chose Thomas as their first substantive witness.

On Tuesday, Thomas testified that she blamed herself for what happened, thinking she must have said or done something that led Cosby to believe she would be open to his advances. She never told her agent or her parents about the alleged assault.

“I was pretty sure whatever I did was my fault,” Thomas testified, adding: “I was just going to move on. And I did.”

Under cross examination, Thomas testified that she chronicled her trip to Reno in a scrapbook and recorded a cassette tape at the home where she had the encounter with Cosby. She said she wanted to recount the trip for her mother and agent but destroyed it years later after seeing a psychiatrist.

It made no mention of the alleged assault, Thomas said, because she had planned to give it to her mom.

The Associated Press does not typically identify people who say they are victims of sexual assault unless they grant permission, which Constand and Thomas have done.