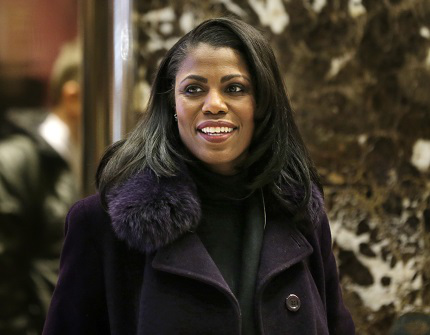 It looks like Omarosa Manigualt-Newman has no regrets about leaving the White House behind. Nope, especially when her financial future is looking real good.

If you haven’t heard, Trump’s former Director of Communications for the White House Office of Public Liaison has a new gig, so to speak. She is now on the roster of speakers signed to the American Program Bureau/APB. The company represents, among others, Jay Leno, Diddy, Kareem Abdul-Jabbar and Magic Johnson.

Omarosa signed Monday morning and will ask for up to $50k a speech, depending on the venue. Robert P. Walker, APB’s founder and CEO, told TMZ that his firm’s goal is to book at least 10 appearances over the next 3 months, and he thinks that’s doable. Hmm, if our math is correct, that’s a whopping $500,000!

“Since it’s Black History Month and Women’s History Month, I’m sure Omarosa will be in high demand, as she has always been,” Walker added.

As we reported, Manigualt-Newman left the Trump administration last month, but was reportedly on the White House payroll until Saturday.

In other Omarosa news … her promised book about what she witnessed in Donald Trump’s White House will reportedly include information about his marriage that could be “very damaging,” political analyst Peter Mathews told In Touch.

Multiple sources are claiming that the former Communications Director at the White House Office of Public Liaison could make up $10 million for the tell-all. And she’s planning to include “unflattering things about the ‘icy’ relationship between Mr. and Mrs. Trump,” according to Inquisitir.

“She knows how much time they spend together and whether or not they even sleep in the same bedroom,” a source told Life & Style. “How much does Melania have to put up with? Does she really agree with her husband’s stance on things? Does she believe any of the sexual harassment allegations lodged against him or are they all lies? Does she plan to divorce him once they’re out of the White House? All these questions could be answered.”

The former star of The Apprentice is said to also write about her experience working in the White House before resigning on Dec. 13. Additionally, sources say that Omarosa could dish about Trump’s peculiar relationship with Ivanka.

“Donald is captivated by his daughter. This is known. He cannot and will not ever say no to her. Ever. Omarosa knows that. Everyone in the West Wing knows that,” the source said. “So get ready for Omarosa to shed some light on that relationship. She may also write that in Donald’s eyes, Ivanka is the real first lady.”