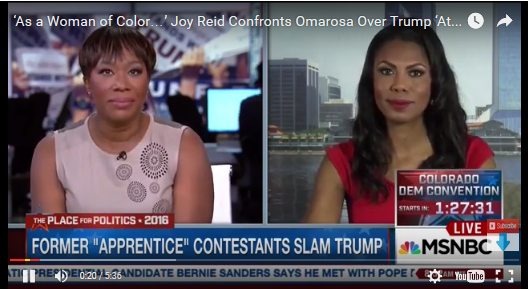 We have to say it’s always interesting to see what happens when Omarosa is on the cable news shows defending Donald Trump.

Yesterday was no exception when MSNBC’s Joy Reid confronted the Trump surrogate about the fact that other former Apprentice contestants are coming out to denounce Trump for hateful rhetoric. Reid played a clip of former “Apprentice” winner Randal Pinkett lambasting Trump for holding what he perceived as divisive policies.

It is the totality of these experiences, realized by only a few and a handful of Americans, that gives us a unique perspective and leads us to the conclusion that Donald is not worthy of the highest office of the land,” Pinkett said.

Omarosa’s response was rather dismissive, saying that they’re clearly all big Democrats and she found the timing very interesting.

“If they were really concerned about Donald Trump,” she asked, “why wait until now?”

Then Reid brought up Trump’s YUGE, er, LARGE unfavorables before pressing her on the substance of the disagreements with Trump. She brought up Trump’s hedging on endorsements from white supremacists, “attacks on immigrants, attacks on Mexican-Americans,” and she asked, “As a woman of color, do you have not concerns about this?”

“Donald Trump is starting a revolution, he’s going to make a lot of people uncomfortable, okay?” Manigault rejoined. “And he’s trying to change the way this system is so completely broken for Americans. There are people — 8 million people, in fact — who exercised their right to vote, and they voted for Donald Trump, and they’re from all different backgrounds, races, creeds and religion. And so, I have to debunk this myth that Donald Trump does not have broad support across different races, religion and gender because those 8 million people are some of the most diverse Americans in this country.”

She made mention the broad and diverse coalition Trump has been attracting in primaries across the country.

Reid shot back, “You know that the Republican primaries so far have been more than 90 percent white, they have not been diverse.”

Omarosa retorted that’s just “the tradition in the Republican primary” and not Trump’s fault.

Like we said, it’s always interesting to see what happens when Omarosa is on the cable news shows defending the Donald.