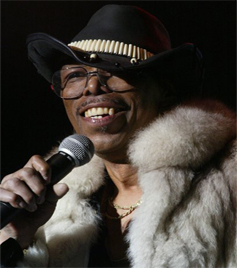 CINCINNATI (AP) — Leroy “Sugarfoot” Bonner, frontman for the hit-making funk music band the Ohio Players, has died. He was 69.

The Ohio Players, known for their brassy dance music, catchy lyrics and flamboyant outfits, topped music charts in the 1970s with hits such as “Love Rollercoaster,” ”Fire,” ”Skin Tight” and “Funky Worm.”

A spokeswoman for a Newcomer Funeral Home in the Dayton suburb of Kettering said Monday morning that the family hadn’t scheduled any public services. There was also a posting about his death on his current band’s Facebook page. No other information was released immediately about his death Saturday.

Born in Hamilton, Ohio, Bonner teamed up in the 1960s with core members of a group called the Ohio Untouchables to form the Ohio Players. The band had a string of Top 40 hits in the mid-1970s and continued to perform for years after that. He had remained active in recent years with a spinoff band called Sugarfoot’s Ohio Players.

“Humble yet charismatic, soft-spoken and of few words, the weight of his thoughts, lyrics and music has influenced countless other artists, songs and trends,” stated a posting attributed as an “official family announcement” on the Facebook page of Sugarfoot’s Ohio Players. “He will be missed but not forgotten as his legacy and music lives on.”

Marshall Jones, the bass player and a founding member of the Ohio Players, called his bandmates “a bunch of the most creative people — especially Sugarfoot — that I have ever been around.”

Jones said after years of playing music, the band’s sudden stardom, with No. 1 singles and huge crowds in venues such as the Superdome in New Orleans, was stunning.

“I sit back now, and it was all a brilliant blaze,” he said. “I think ‘Damn, did I do that?’ It was just ‘Zoom!’ That was a starburst. And like all things like that, it fizzles.”

Jones said he, Bonner and other band members were delighted and flattered when “Love Rollercoaster” gained new fans through a 1990s cover by the Red Hot Chili Peppers.

Bonner had said he learned about music in Hamilton, where he was the oldest of a large family, playing harmonica, learning guitar and sneaking into bars as an adolescent to play with adult musicians. He said he ran away from his home some 20 miles north of Cincinnati at age 14, and told the Hamilton JournalNews in 2009 that he had only gone back there once. He explained he had bad memories of growing up poor.

He wound up in Dayton, where he connected with the players who would form the band. Their lineup changed at times, but featured horns, bass, guitar, drums and keyboards.

“We were players. We weren’t trying to be lead singers, but we became one of the first crossover singing bands,” Bonner told the Dayton Daily News in a 2003 interview. He said he initially played with his back to the audience, because he didn’t want to get distracted.

While the band used sexual innuendo, Bonner said he didn’t relate to some of the explicit lyrics and attitudes of later pop music and rap.

“There is nothing but the old school and the new fools,” he said. “It’s a shame the way these artists are preaching badness to a drum beat.”