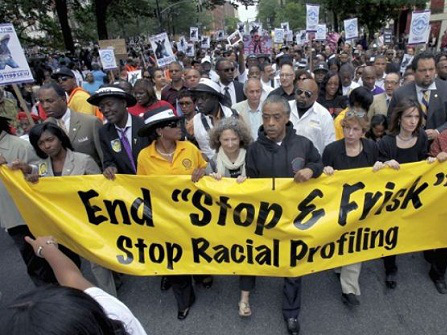 NEW YORK (AP) — The new mayor on Thursday delivered on his promise to reform stop-and-frisk police tactics, agreeing to the appointment of a monitor and seeking to end a 14-year court fight that culminated in a judge’s ruling that New York City had discriminated in carrying out the crime-reduction program.

“We believe these steps will make everyone safer,” Mayor Bill de Blasio told a Brooklyn news conference shortly after city lawyers asked the 2nd U.S. Circuit Court of Appeals to return the case to the lower court “for the purpose of exploring a full resolution.”

He said the city agreed to the appointment of a monitor for three years to oversee the creation of reforms aimed at ending discrimination. The monitor will oversee a process in which those communities most affected by the stop-and-frisk tactics will provide input on the reforms.

“I can’t wait to get started,” said Vincent Warren, executive director of the Center for Constitutional Rights, which has represented plaintiffs in the lawsuits. “We will have a collaborative reform process. We’ll have a court monitor to ensure these reforms move forward.”

Police Commissioner William Bratton said the policy as it had been carried out for years had left too many people who were frisked asking, “Why, why me?” while police officers being pressed to make ever more arrests even as crime rates fell dramatically were wondering, “Why more?”

He said the policy had torn the fabric between the police and the population. “We need to repair it,” he said.

A judge ruled last year that the New York Police Department had discriminated against blacks and Hispanics when stopping, questioning and sometimes frisking people on the street. The judge ordered major reforms to the department’s implementation of the policy.

Then-Mayor Michael Bloomberg appealed the decision. But de Blasio, who took office at the beginning of the year, had made settling the stop-and-frisk issue a major component of his campaign.

Bloomberg was a staunch advocate of the policy. Stops had soared under his 12-year tenure to more than 5 million in the past decade, mostly of black and Hispanic men. About 10 percent of the stops result in arrests or summonses, and weapons were found about 2 percent of the time.

Four men sued the department in 2008, saying they were unfairly targeted because of their race. U.S. District Court Judge Shira Scheindlin presided over a 10-week bench trial in which she heard testimony from a dozen New Yorkers who said they were wrongly stopped. She agreed and imposed a court-appointed monitor to oversee reforms, but her ruling has been on hold pending the appeal.

The federal appeals court also had taken the unusual step of removing Scheindlin from the case, saying she misapplied a related ruling that allowed her to accept it to begin with and had inappropriately spoken publicly about the case.

Plaintiffs’ attorney Jonathan Moore said the city’s decision to drop the appeal “vindicates the findings by Judge Scheindlin and provides the opportunity for the NYPD to reform policies and practices that the district court found unconstitutional.”

De Blasio and Bratton have said the policy has created a rift among New Yorkers who don’t trust police and made morale low for officers who should be praised for stellar efforts reducing crime to record lows.

The stop-and-frisk tactic itself was not ruled unconstitutional, but the way the department was using it violated civil rights, the judge said.