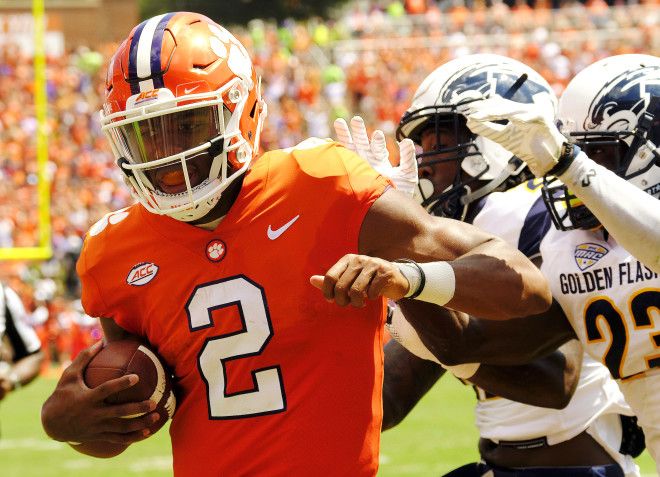 CLEMSON — Kelly Bryant passed for 236 yards and a touchdown and ran for 77 more yards in his first game as Clemson’s starting quarterback and the No. 5 Tigers beat Kent State 56-3 on Saturday.

Bryant has the hefty responsibility of replacing Deshaun Watson behind center for the defending national champions. The junior, who had thrown just 22 passes in his career for Clemson (1-0) in mop up duty, showed he could both run and pass.

Bryant had a perfectly placed 61-yard touchdown pass to Deon Cain on his second drive. He mirrored Watson’s running ability, taking off for a 47-yard run after all his receivers were covered. And he showed the “swag” that coach Dabo Swinney promised to fans skittish about Watson’s departure.

Bryant led Clemson on an 89-yard touchdown drive that put Clemson ahead 35-3 to start the second half, and then Swinney played his backups.

The Golden Flashes (0-1) were without coach Paul Haynes, who missed the game for medical reasons. They gained just 119 yards.

Kent State: The Golden Flashes aren’t too sure about their passing game. Kent State did not attempt a pass in 25 first-half plays, despite facing a third-and-28 at one point. Their quarterbacks completed one pass for 1 yard. Kent State used four quarterbacks last year, averaging just 141.7 yards a game passing. Only seven other Football Bowl Subdivision teams threw for less.

This is the second year in a row Kent State has played the defending national champions. The Golden Flashes lost to Alabama 48-0 in 2016.

Clemson: The Tigers gained 665 yards, more than they did in any game in the 2016 season. Sure, it was against Kent State but after losing top receiver Mike Williams and rusher Wayne Gallman, the opener gave Clemson fans nothing to worry about. Four Tigers gained at least 50 yards rushing and five ran for touchdowns.

The Tigers celebrated their second national title one last time before the game and at halftime. The Tiger mascot ran the championship trophy down the hill before the game, the school unveiled three different signs around the stadium marking the playoff appearance and title, and the band did a “31-0” formation to honor the score in Clemson’s demolition of Ohio State in the national semifinals.

Clemson: The Tigers host No. 12 Auburn. Swinney is 11-8 all-time against SEC teams (with five of those losses to South Carolina) and 5-2 against the SEC since the start of 2014.