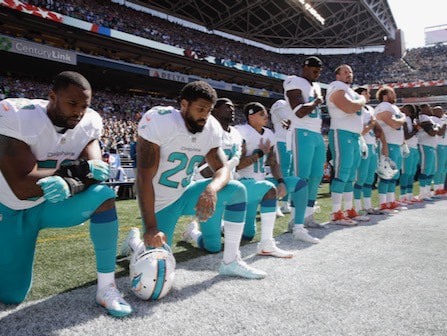 The NFL will not implement any new policy this season on players standing or kneeling during the national anthem, according to an ESPN report.

Back in May, league owners approved a new policy banning any kind of visible protest, stating that “all league and team personnel shall stand and show respect for the flag and the Anthem,” before games.

But pressure from the NFLPA—which was not consulted about the policy—and complaints from players, the NFL suspended the anthem rule before any games were played, as league officials continue discussion on the highly controversial issue.

Now, according to Adam Schefter, those talks aren’t going to lead to any anthem policy for the 2018 season.

The NFL is not expected to implement a new policy on the national anthem this season, league sources told ESPN, no matter how many meetings and conversations occur regarding the topic.

The new policy is going to be no policy — at least for this season, according to sources.

In related news, new NIKE hero Colin Kaepernick hit up social media to thank the first two players reported to kneel during the playing of the anthem on the opening Sunday of the 2018 season.

Miami Dolphins wide receivers Kenny Stills and Albert Wilson received high praise from the former 49er for taking a knee before kick for.

“My Brothers @kstills and @ithinkisee12 continue to show their unwavering strength by fighting for the oppressed!,” Kaepernick said in a Twitter post accompanied by a picture of the two players kneeling.

“They have not backed down, even when attacked and intimidated. Their courage will move the world forward!

“Love is at the root of our resistance!”

Kaepernick is the most outspoken athlete in the past two years to protest against social injustice and police brutality.