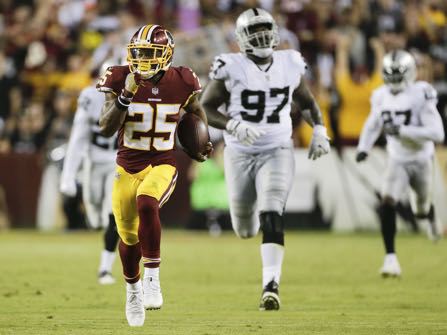 NEW YORK (AP) — Through three weeks, viewership for national telecasts of NFL games is down 11 percent this season compared to 2016, the Nielsen company said on Tuesday.

Nielsen said the games averaged 17.63 million viewers for the first three weeks of last season, and have dipped to 15.65 million this year. The Nielsen figures don’t include many of the Sunday afternoon games that are shown to a regional audience, but not a national one.

The NFL ratings are in focus because of President Donald Trump’s suggestion that viewers are turned off by a protest against police brutality that began with quarterback Colin Kaepernick refusing to stand for the national anthem. The protests spread rapidly this past weekend following the president’s criticism of people involved.

Next week’s ratings will be even more closely watched, since conservative groups and Fox News Channel’s Sean Hannity have called for people angered by the protests to boycott this weekend’s games.

Meanwhile, Round One of the new ideological battle on cable television news went to Hannity, who has moved to a time slot directly competing with MSNBC’s Rachel Maddow. Nielsen said Hannity had 3.27 million viewers on Monday, compared to 2.66 million for Maddow. CNN, which showed a special health care debate at the same hour, had 1.45 million viewers.

The end of summer has to be sad for NBC, which has dominated in network ratings due to the success of “America’s Got Talent.” The show’s finale last week was seen by 15.6 million viewers, its biggest audience for a season-ender since 2010.

CBS usually dominates the ratings from September to May, but NBC has won 12 of the last 14 weeks due to the leadership of “America’s Got Talent.”

ESPN was the week’s most popular cable network, averaging 2.48 million viewers in prime time. Fox News Channel had 2.08 million, MSNBC had 1.62 million, USA had 1.5 million and HGTV had 1.24 million.

ABC’s “World News Tonight” topped the evening newscasts with an average of 8.3 million viewers. NBC’s “Nightly News” was second with 8.2 million and the “CBS Evening News” had 6.6 million.