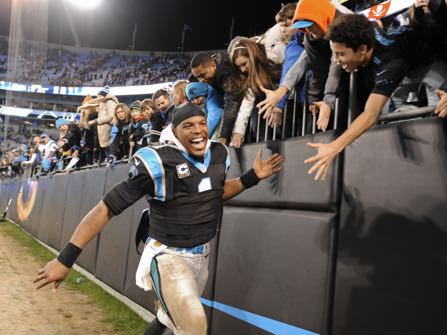 Carolina closed out its remarkable season by wrapping up home-field advantage in the NFC. Denver turned to Peyton Manning to take advantage of New England’s slip-up in the AFC. And Rex Ryan made certain to continue the New York Jets’ playoff drought.

Carolina and Denver wrapped up the No. 1 playoff seeds in each conference by winning at home on the final day of the regular season on Sunday. Carolina routed Tampa Bay 38-10, while Denver edged San Diego 27-20 to win the AFC West title.

“We find our edge playing in front of the home crowd,” Carolina QB Cam Newton said. “Everything here feels just right. We don’t have travel to a hostile environment. This is our house — and it’s hostile.”

New England will be the No. 2 seed in the AFC after losing at Miami, while Arizona will have the other bye in the NFC despite getting routed 36-6 by Seattle.

New England will host the early game on Saturday, Jan. 16, with Denver hosting the lowest remaining AFC seed in the late game on Sunday, Jan. 17.

The NFC playoff picture was settled late Sunday night when Minnesota beat Green Bay 20-13 to win the NFC North. The Vikings will host Seattle in the early game Sunday, while Green Bay will travel to NFC East champion Washington for the late Sunday game. The Redskins closed the season with their fourth straight win on Sunday beating Dallas.

The highlight of the day was Ryan and the Buffalo Bills stopping the Jets from making the playoffs and gave the Steelers the final playoff spot in the AFC. The Bills beat the Jets 22-17, while Pittsburgh knocked off Cleveland 28-12, the only results that would have gotten the Steelers into the postseason. The Jets have not made the playoffs since 2010.

“I’ve got a lot of friends over there, and I want them to be successful, but not at my expense,” Ryan said.

Ryan has plenty of friends in the Steel City now.

“A lot of thanks to coach Ryan and the rest of the Bills and everybody in Buffalo,” Steelers quarterback Ben Roethlisberger said. “I know they’re excited about 8-8 and we’re excited they got us in.”

New England had a chance at home field in the AFC, but flopped in Miami getting beat 20-10. Denver struggled in the first half against San Diego before inserting Manning in place of Brock Osweiler at quarterback and holding on late for the seven-point victory.

“Wherever we play, we play,” Patriots coach Bill Belichick said.

Houston also clinched the AFC South with its win over Jacksonville and will host Kansas City after the Chiefs beat Oakland for their 10th straight victory.

Houston avoided the headache of possibly having to look at eight different tiebreakers against the Colts by beating Jacksonville 30-6 to win the AFC South, making Indianapolis’ victory over Tennessee moot. The Colts entered the day with the slimmest of chances to win the division, but a Texans loss was needed. Houston is the fourth seed.

“We are not happy with just winning the AFC South,” Houston wide receiver DeAndre Hopkins said. “There are bigger goals ahead of us.”

Seattle rebounded from last week’s loss at home against St. Louis with one of its most dominant victories of the season, winning big at Arizona. The Seahawks led 30-6 at halftime and won for the sixth time in seven games. It’ll be their second trip to Minnesota in about a month. Seattle beat the Vikings 38-7 on Dec. 6.

“These guys are confident that we can go wherever we got to go,” Seattle coach Pete Carroll said.