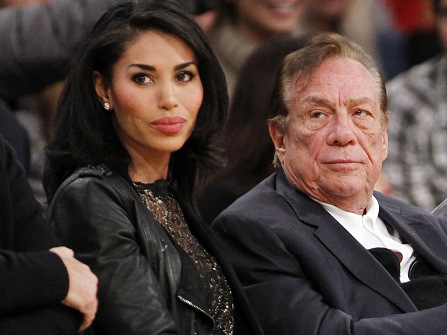 Just because the Donald Sterling no longer owns the LA Clippers doesn’t mean you won’t be bothered with hearing about him, thanks to V. Stiviano.

Yes, his former mistress, er, companion, er, archivist or whatever … filed new legal papers in her war with Shelly Sterling, claiming she never slept with Donald Sterling. And her reasoning is … wait for it … he’s into men and she was his “beard” or pretend girlfriend.

TMZ Sports got its hands on the lawsuit – which Stiviano filed in response to Shelly’s allegations that V. accepted cars and property from Donald that he didn’t have the authority to give her.

In the new docs, Stiviano argues that the items in question were given to her in exchange for being Donald’s “beard” — and she insists Shelly knew about it.

Stiviano states … she was “not ever a sexual partner of Donald T. Sterling” and “believes that [Sterling] is a homosexual and enjoys sexual acts and or sexual congress with males.”

In the legal doc, filed in L.A. County Superior Court, Stiviano says Shelly was “acutely aware of [Donald’s] sexual orientation and condoned same as well as acknowledged and approved [Donald’s] gifts of money [to Stiviano].”

Stiviano also says the gifts she received were NOT community property — but rather Donald’s separate property.

The lawsuit also reveals that Stiviano is also suing Shelly and Donald Sterling for defamation — claiming they slandered her in the media by calling her a thief and saying she embezzled money and property from Donald. She’s demanding no less than $10 MILLION.