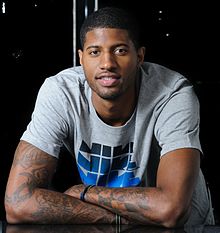 Indiana Pacers star Paul George is the alleged victim of an online catfish scheme, sending naked selfies to what he believed to be a woman. Turns out it was a gay male who schemed him (and others, including Kenyon Martin and rapper Romeo) all along and is now making the scandalous photos public.

George says that photos that recently surfaced of him were not part of a catfish scheme, but a fake story intended to disparage him.

“The whole story, as far as me being “Catfished,” I know the girl that sent the pictures out,” George said after the Pacers’ shoot-around. “It wasn’t a catfish story, it was a girl. I don’t want to get into the story but I know who’s behind it.”

What do you think? Does the story sound credible? Who do you believe, Paul or the ‘catfish?’