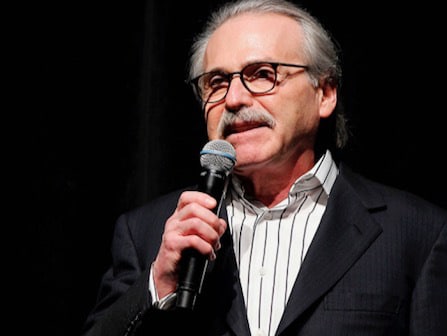 WASHINGTON (AP) — The National Enquirer kept a safe containing documents on hush money payments and other damaging stories it killed as part of its cozy relationship with Donald Trump leading up to the 2016 presidential election, people familiar with the arrangement told The Associated Press.

Five people familiar with the National Enquirer’s parent company, American Media Inc., who spoke to the AP on the condition of anonymity because they signed non-disclosure agreements, said the safe was a great source of power for Pecker, the company’s CEO.

The Trump records were stored alongside similar documents pertaining to other celebrities’ catch-and-kill deals, in which exclusive rights to people’s stories were bought with no intention of publishing to keep them out of the news. By keeping celebrities’ embarrassing secrets, the company was able to ingratiate itself with them and ask for favors in return.

But after The Wall Street Journal initially published the first details of Playboy model Karen McDougal’s catch-and-kill deal shortly before the 2016 election, those assets became a liability. Fearful that the documents might be used against American Media, Pecker and the company’s chief content officer, Dylan Howard, removed them from the safe in the weeks before Trump’s inauguration, according to one person directly familiar with the events.

It was unclear whether the documents were destroyed or simply were moved to a location known to fewer people.

Jerry George, a longtime Enquirer reporter who left the publication in 2013, said the practice of catch and kill took root at the Enquirer under Pecker. Though George had no personal knowledge of Trump-specific catch and kills, he said that AMI generally paid hush money only if it believed it had something to gain.

“It’s ‘I did this for you,’ now what can you do for me,” George said. “They always got something in return.”

Catch and kills were loathed by the National Enquirer’s reporters, he said, because they robbed the publication of juicy stories.

American Media did not immediately respond to a request for comment.

Court papers in the Cohen case say Pecker “offered to help deal with negative stories about (Trump’s) relationships with women by, among other things, assisting the campaign in identifying such stories so they could be purchased and their publication avoided.”

While Trump denies the affairs, his account of his knowledge of the payments has shifted. In April, Trump denied he knew anything about the Daniels payment. He told Fox News in an interview aired Thursday that he knew about payments “later on.”

In July, Cohen released an audio tape in which he and Trump discussed plans to buy McDougal’s story from the Enquirer. Such a purchase was necessary, they suggested, to prevent Trump from having to permanently rely on a tight relationship with the tabloid.

“David gets hit by a truck,” Trump says.

Last March, in response to a letter from a group of House Democrats about the Daniels and McDougal payments, American Media general counsel Cameron Stracher declined to provide any documents, writing that the company was “exempt” from U.S. campaign finance laws because it is a news publisher and it was “confident” it had complied with all tax laws. He also rebuffed any suggestion that America Media Inc., or AMI, had leverage over the president because of its catch-and-kill practices.

“AMI states unequivocally that any suggestion that it would seek to ‘extort’ the President of the United States through the exercise of its editorial discretion is outrageous, offensive, and wholly without merit,” Stracher wrote in a letter obtained by The Associated Press.

Former Enquirer employees who spoke to the AP said that negative stories about Trump were dead on arrival dating back more than a decade when he starred on NBC’s reality show “The Apprentice.”

The Enquirer endorsed Trump for president in 2016, the first time it had ever officially backed a candidate. In the news pages, Trump’s coverage was so favorable that the New Yorker magazine said the Enquirer embraced him “with sycophantic fervor.”

Positive headlines for Trump, a Republican, were matched by negative stories about his opponents, including Hillary Clinton, a Democrat: An Enquirer front page from 2015 said “Hillary: 6 Months to Live” and accompanied the headline with a picture of an unsmiling Clinton with bags under her eyes.