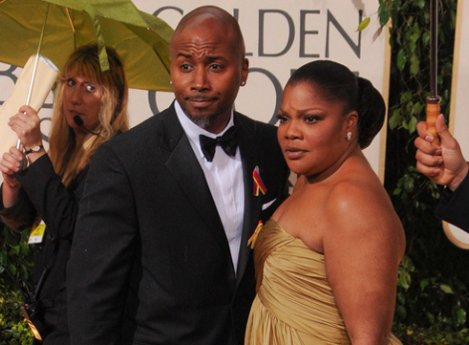 Five years after her Oscar win as Best Supporting Actress for Precious, Mo’Nique has been less visible than ever before. Once a standup comedian and actress who appeared in several film before her Oscar win and hosted a BET talk show, Mo’Nique has had few credits since. She’s behind the indie movie Blackbird with Isaiah Washington, about a young man coming to terms with his sexuality, but her Oscar didn’t upgrade her career.

It’s because, she says, she was blackballed. In an interview with The Hollywood Reporter to commemorate the 75th anniversary of Hattie McDaniels’ Best Supporting Actress win for Gone With the Wind, the first Oscar ever given to an African-American, Mo’Nique acknowledges she and her husband/manager Sidney Hicks may be partially responsible.

During the Precious awards campaign season, Mo’Nique, then shooting her BET show, believed that she should be compensated for appearances related to the movie. That, she says, may have contributed to a backlash. A proposed McDaniel biopic starring Mo’Nique who counts her as a spiritual influence, has yet to be made.

Here are some of Mo’Nique’s quotes from the interview.

On why she’s OK with not campaigning for the Oscar she won anyway:

The things people were writing and saying, it was mind-blowing. But what I was saying was, “You want me to campaign for an award — and I say this with all the humility in the world — but you want me to campaign for an award that I didn’t ask for.” So when I’m in Utah at the Sundance Festival, and an Asian brother comes up to me and breaks down in my arms, and says, “Mo’Nique, I am Mary Jones,” do you know that’s the biggest award you could receive? It had nothing to do with a trophy. If people want to say I didn’t campaign because I took my family first? I’ll accept that.

On Lee Daniels telling her straight up that she’d been ‘blackballed’ in Hollywood:

What I understood was that when I won that Oscar, things would change in all the ways you’re saying: It should come with more respect, more choices and more money. It should, and it normally does. Hattie said, “After I won that award, it was as if I had done something wrong.” It was the same with me. I thought, once you won the award, that’s the top prize — and so you’re supposed to be treated as if you got the top prize.

I got a phone call from Lee Daniels maybe six or seven months ago. And he said to me, “Mo’Nique, you’ve been blackballed.” And I said, “I’ve been blackballed? Why have I been blackballed?” And he said, “Because you didn’t play the game.” And I said, “Well, what game is that?” And he gave me no response. The next thing he said to me was, “Your husband is outbidding you.” But he never asked me what [salary] we were asking for. You know, my husband and I had to change things so we wouldn’t have to depend on [others]. So we do it independently.

On whether or not she’s difficult to work with:

Whoever those people are who say, “Mo’Nique is difficult,” those people are either heartless, ruthless or treat people like they’re worthless. And that’s unacceptable. They’re set to say, “Mo’Nique is tactless, she’s tacky.” That’s why I have my beautiful husband, because he’s so full of tact, ’cause I’m a girl from Baltimore. I come from a blue-collar town — and being from that place, you learn not to let anybody take advantage of you. You don’t let people mistreat you. You stand up for what’s right.

On not working with Lee Daniels again:

I was offered the role in The Butler that Oprah Winfrey played. I was also approached by Empire to be on Empire. And I was also offered the role as Richard Pryor’s grandmother in [Daniels’ upcoming Pryor biopic]. Each of those things that he offered me was taken off the table. (Laughs.) They all just went away.

Lee Daniels’ response via a statement to THR:

Mo’nique is a creative force to be reckoned with. Her demands through Precious were not always in line with the campaign. This soured her relationship with the Hollywood community. I consider her a friend. I have and will always think of her for parts that we can collaborate on. However, the consensus among the creative teams and powers thus far were to go another way with these roles.”