Cosby’s wife, Camille Cosby, says the outcome is a “manifestation of justice, based on facts, not lies.” 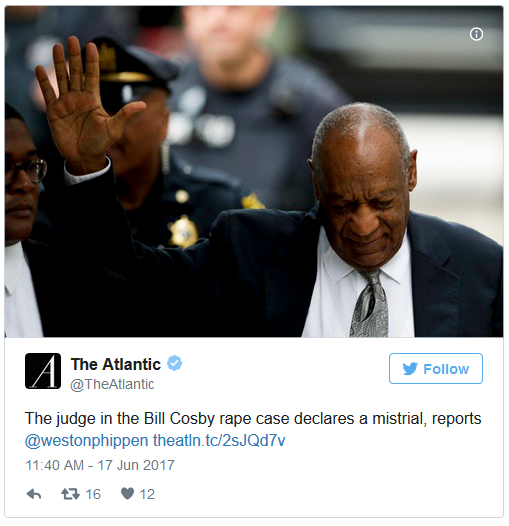 According to the outlet, the decision comes days after the jury—which consisted of five women and seven men—failed to collectively make a decision on whether or not Cosby should be charged for the sexual assault allegations brought against him. Cosby, 79, plead not guilty to three counts of felony aggravated indecent assault, writes the source.

The Huffington Post reports that after spending over 52 hours deliberating, the jurors told the judge that they were unable to reach a unanimous decision. According to ABC News during the trial, which spanned for a week, there was a testimony by a detective and parts of his deposition from the lawsuit filed by his accuser Andrea Constand, 44, were shared.

Constand, her mother, and another accuser testified in court last week, reports the outlet. “In my head I was trying to get my hands to move or my legs to move, but I was frozen and those [mental] messages didn’t get there and I was very limp, so I wasn’t able to fight him,” said Constand during her testimony.

Cosby did not testify. ABC News reports that his wife, Camille Cosby, was present for the first time in court during the trial on Monday. Following the judge’s decision, she released a statement saying it was a “manifestation of justice, based on facts, not lies,” according to the source.