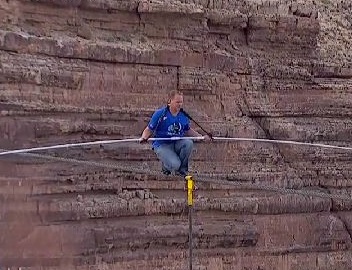 Nik Wallenda proved again Sunday that he is indeed the King of the High Wire, becoming the first person to walk a tightrope over the “Grand Canyon” in what was billed as a life or death stunt. Indeed it was a death-defying act, crossing a 1,500-foot-deep canyon on a 2-inch steel rope, but it was a bit misleading, considering it wasn’t exactly the Grand Canyon. The place where Wallenda made his 1,400-foot-long tightrope walk was actually over Little Colorado Gorge in the Little Colorado River Navajo Tribal Park, land of the Navajo Nation, located near Cameron, Arizona, according Forbes magazine.

A tweet from Grand Canyon National Park on Sunday also made it clear the stunt was not in the park itself. “The event would not have been approved in Grand Canyon National Park,” Maureen Oltrogge, the park’s public affairs officer, told Forbes. But Navajo Nation gave Wallenda and Discovery Channel permission to use a gorge on its landThe stunt was no-less dramatic, no-less grand, however. Unlike his historic crossing of Niagara Falls last year when he wore a safety harness for the first time in his life, Wallenda returned to his modus operandi and did the breath-taking walk without a safety harness or safety net.

A misstep would have meant plunging to the bottom of the gorge and Little Colorado River below, a drop measuring more than the height of the Empire State Building. A global audience watched live on Discovery Channel or Discovery.com as Wallenda successfully performed his highest tightrope walk ever, a 22-minute, 54-second endeavor that was every bit as intense and entertaining as expected. “I did it,” he said on Discovery Channel, tears running down his face just moments after getting off the wire.

Asked how he was feeling, he replied, “Emotional.” Then he asked for some water. “It was way more windy [than expected], and the movement of the cable, the sidewalls, as I was walking, were getting in the way and were confusing me as the pendulums were swinging against them. So I tried to react and when I react, I take the rhythm into the cable. It took every bit of me to stay focused that entire time. My arms are aching like you’d never believe.” Before he began his walk, Wallenda gathered with family and evangelist Joel Osteen for a prayer before he was delivered by helicopter to the other side of the gorge for the start.

Temperatures were 85 degrees with southwest winds of 6 to 13 mph with one wind gust measuring 48 mph. Almost as soon as he began, Wallenda, a devout Christian, began praying. “How I love you, Jesus … You’re my Savior, yes Jesus … God, you’re so good. Thank you for this opportunity. Calm these winds in the name of Jesus.” Twice during the walk, Wallenda kneeled down, providing some tense moments as his balancing poll swayed in the wind. The photo above shows the second time he kneeled. We presume what he was doing was trying to take the inconsistent bounce out of the wire and get the cable back into a smooth rhythm, as he spoke about in his interview.

Near the conclusion of his walk, which measured 1,400 feet, or nearly the length of five football fields, Wallenda ran to the end of the wire, jumped off, and then kissed the ground with a huge sigh of relief. No doubt those watching live exhaled, themselves. Wallenda, 34, a married father of three who holds six Guinness World Records for various high-wire and acrobatic feats, signed a contract with Discovery Channel in 2012 for near-exclusive broadcast rights of his acts. He has made several death-defying tightrope walks, all performed without a safety harness or net. In 2011, he walked a 100-foot wire at a height of 121 feet between two towers of a hotel in San Juan, Puerto Rico. It was a re-creation of the stunt that killed his great-grandfather Karl Wallenda in 1978 when a gust of wind caused him to lose his balance and fall.

In 2010, Wallenda rode a bicycle along a high-wire 260 feet above the ocean at the Atlantis Paradise Island resort in the Bahamas for a Guinness World Record for highest bike ride on a high-wire. He then took his longest tightrope walk of his career, going 2,000 feet over the resort’s lagoon at a height of 250 feet. And, of course, there was the tightrope walk directly over Niagara Falls last year. What could possibly be next? “My dream for my next stunt is to walk between two skyscrapers in New York City,” Wallenda told Discovery Channel. “I can imagine the millions of fans that will be there watching, and that really is what holds me up, my fans.” Well, then, as Frank Sinatra would say, start spreading the news. But whatever he does next, whether it’s NYC or not, no doubt his fans will be watching.