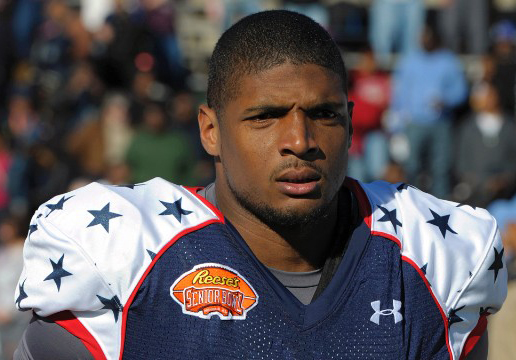 “I came to tell the world I’m an openly proud gay man,” he said in an interview with ESPN.

He said he told his Missouri teammates in August and suffered no repercussions. He said he was surprised to discover many people in the media already knew he was gay.

“I understand how big this is,” Sam said in the ESPN interview. “It’s a big deal. No one has done this before. And it’s kind of a nervous process, but I know what I want to be … I want to be a football player in the NFL.”

Sam also spoke about his sexual orientation Sunday to The New York Times, saying: “I just want to make sure I could tell my story the way I want to tell it. I just want to own my truth.”

Sam, at 6-foot-2 and 260 pounds, starred in college football last season. Besides being first team All-American, he was named the top defensive player in the Southeastern Conference, considered the nation’s best league. Teammates named him the team’s most valuable player.

With those credentials, he’s expected to be picked in the NFL draft in May. The Bleacher Report mock draft projected him to go in the late rounds because “athletic limitations including a lack of flexibility and a lack of optimal size are concerning.”

The NFL issued a statement on Twitter on Sunday: “We admire Michael Sam’s honesty and courage. Michael is a football player. Any player with ability and determination can succeed in the NFL. We look forward to welcoming and supporting Michael Sam in 2014.”

However, the NFL has made headlines on the issue of sexual orientation in the past. Last year, a University of Colorado player said an NFL team asked him if he liked girls and had a girlfriend.

The NFL quickly said, “Any team or employee that inquires about impermissible subjects or makes an employment decision based on such factors is subject to league discipline.”

Sam issued his own Tweet: “I want to thank everybody for their support and encouragement, especially @espn, @nytimes and @nfl. I am proud to tell my story to the world!”

Other athletes have come out as gay, but they didn’t have Sam’s profile.

Of those athletes, Collins made the biggest media splash. He’s not playing in the NBA this season.

Praise poured in for Sam, who overcame a rough childhood in which one of his brothers was killed and others ended up in prison.

Sam’s head football coach at Missouri, Gary Pinkel, said: “We’re really happy for Michael that he’s made the decision to announce this, and we’re proud of him and how he represents Mizzou. Michael is a great example of just how important it is to be respectful of others, he’s taught a lot of people here first-hand that it doesn’t matter what your background is, or your personal orientation, we’re all on the same team and we all support each other.”

GLAAD President Sarah Kate Ellis said in a prepared statement: “By rewriting the script for countless young athletes, Michael has demonstrated the leadership that, along with his impressive skills on the field, makes him a natural fit for the NFL. With acceptance of LGBT people rising across our coasts — in our schools, churches, and workplaces — it’s clear that America is ready for an openly gay football star.”