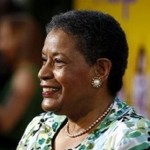 The Presidential Inaugural Committee announced Tuesday that Myrlie Evers-Williams would deliver the prayer. It comes 50 years after her husband was gunned down in the driveway of his Mississippi home. The inauguration falls on Martin Luther King Jr. Day. .

Evers-Williams is a distinguished scholar at Alcorn State University in Lorman, Miss. She was chairwoman of the NAACP from 1995 to 1998.

In a statement, Obama says Evers-Williams and Giglio represent the ideals of justice, equality and opportunity that he pursues.

In 2009, the Rev. Rick Warren delivered the invocation.