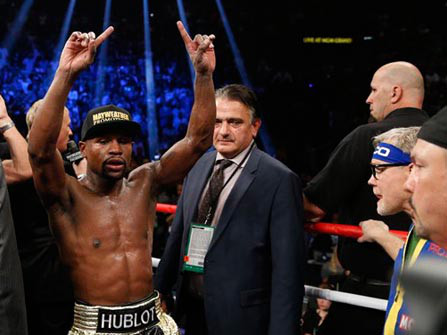 Floyd Mayweather Jr. walked away with another belt in the so-called Fight of the Century against Manny Pacquiao, but HBO and Showtime delivered the knockout punch that fans were pining for.

With 4.4 million PPV buys (nearly double the old 2.48 million record) and over $410 million in domestic PPV revenue, the May 2 fight has dropped all competitors to become the most watched and highest grossing pay-per-view event in history.

The revenue result comes in just over what ringside commentators estimated on the night of the fight – and that’s despite streaming of the battle showing up on Twitter’s Periscope app and other similar technologies and cable outages in some major markets.

The long-awaited May 2 showdown between Mayweather Jr. and Pacquiao, dubbed “The Fight of the Century,” earned more than $400 million in TV buys alone – clobbering the previous $150 million record set in 2013 by the Mayweather-Canelo fight.

Views for the event, a rare revenue share for HBO and Showtime, essentially cost $100 a pop, with cable and satellite providers charging $89.95 and an almost obligatory extra $10 for high definition. Showtime and HBO estimate that the audience for the fight topped 4.4 million buys, nearly double the old 2.48 million record.

All told, the fight will ultimately earn more than $500 million in revenue, with additional dough from the live gate at Las Vegas’ MGM Grand pulling in more than $71 million. (The previous record was $20 million.) International television distribution, sponsorships, closed circuit and merchandise sales, which will further drive the total, have not yet been tallied.