A man in Montana is alleging that his 6-year-old son found a bullet inside a bag of Flamin’ Hot Cheetos.

According to reports from TMZ, a man by the name of Bow Horn Weasel went public with these claims on Tuesday, April 6. The Montana native reportedly purchased a bag of Flamin’ Hot Cheetos Puffs on Saturday. The next day, his six-year-old son allegedly opened the container of puffs and found a bullet at the bottom of the bag.

The report includes a screenshot of a DM exchange between Horn Weasel and the official Frito-Lay page on Facebook.

While this claim comes suspiciously close to Cinnamon Toast Crunch gate, the Montana native is adamant that this is a completely serious claim. He goes on to tell TMZ that he already heard back from a Frito-Lay representative and is being sent a testing kit for the bullet.

According to the report, Mr. Bow Horn Weasel isn’t looking to be financially compensated but is simply hoping to prevent this alleged incident from being repeated for other customers in the future. 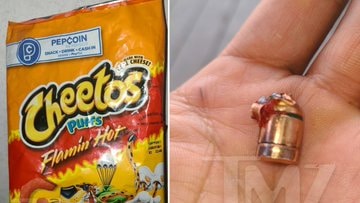 While this isn’t as disgusting as finding shrimp tails in your cereal, there’s obviously something very upsetting about finding a bullet in…anything you’re eating. Hopefully, this issue gets resolved quickly.

In other Cheeto-related news, it looks like Eva Longoria will be producing a film about the famous hot snack its creator Richard Montañez. Yahoo News reports that the biopic is tentatively titled Flamin’ Hot and will detail Montañez’s life and how he succeeded with building the storied brand.

Longoria told EW last year that she was excited about getting the chance to bring Montañez story to life.

“It’s a beautiful story about the Mexican janitor who worked at the factory and invented the hot Cheeto, and saved people’s jobs, and couldn’t read or write when he started,” she said at the time. “His whole life, he was told ‘no. That opportunity’s not for you, ideas don’t come from people like you…’ And he was like, ‘Why not?’ It’s a very beautiful story [about] the man and his journey and how he succeeded in a world that tells you no.”

However, the actress and producer admitted that she felt a sense of pressure to get the forthcoming film right because of the entertainment industry’s rigid and often unfair standards towards people of color.