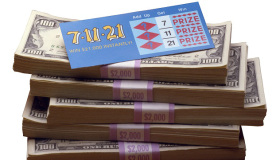 SALINA, Kan. (AP) — A Kansas man who returned a $1 million lottery ticket to a customer who left it on a store counter says he has no regrets about giving up the prize money.

Kal Patel, whose parents own the Pit Stop convenience store in Salina, returned the ticket to a longtime customer after tracking him down in his car.

The winner, who has chosen to remain anonymous, bought three tickets at a store in nearby Lincoln, but went to the Pit Stop — his neighborhood convenience store — to check if they were winners. The clerk checked two tickets and the winner accidentally left the third on the counter, The Salina Journal reported.

When clerk Andy Patel ran the numbers and discovered it was a $1 million winner, he called Kal Patel.

“He said six zeroes were popping up on the screen,” said Kal Patel, who is not related to Andy. “We couldn’t believe it.”

Kal Patel knew who the customer was based on the clerk’s description and knew the area where he lived. He drove around the neighborhood once but couldn’t find the man’s house. He returned to the store, but later decided to give it another try. That time, he saw the man and his brother driving away and was able to stop them.

“I showed them the ticket and told them they were winners,” he said. “They started shaking. They couldn’t believe it.”

Friends have chided Kal Patel for giving up the $1 million, but he said he didn’t want to live with the guilt of keeping the money.

“It felt good to give it to them,” he said. “And the praise we got back from everyone for doing this was really nice. They said it restored their faith in humanity.”

KWCH reports that Wichita law firm DeVaughn James Injury Lawyers this week gave Kal a $1,200 check to reward him for his good deed.