Legacy Charter prepares players on and off the court
POSTED BY WLAS January 22nd, 2013 0 COMMENTS 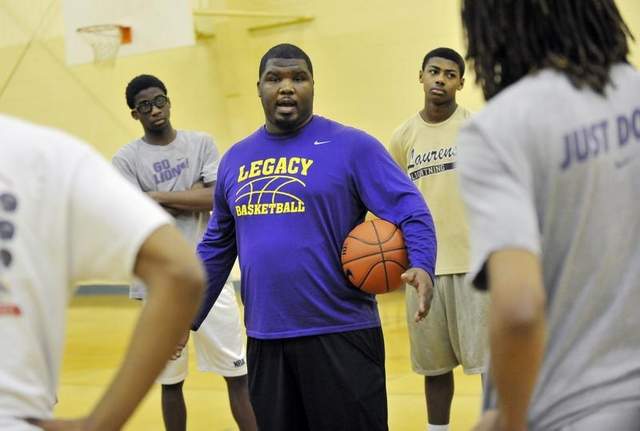 Before the calendar had turned to 2013, Legacy Charter School’s first-year varsity boys basketball program had played nearly 20 games and had competed in four tournaments, three of them out of state.

“Some people say we’re almost like an AAU team,” said B.J. Jackson, the Lions’ coach. “I would say, ‘Yeah, we are, because we travel a lot.’

“We play a lot of post-graduate schools, which puts us in games with a lot of college-style rules, which is good for these kids. We played one tournament with 18-minute halves. That’s getting them into a situation where it’s preparing them for college. They’re getting pushed.

“We’ve got a writing teacher who’s helping them with their writing skills. We’re providing them with study hall twice a week. We’re putting them in a situation where they’re going to be prepared athletically and academically.”

That’s the idea, and as far as Jackson – who came to Legacy after three seasons as Southside High School’s coach – is concerned, so far, so good.

Point guard Jawun Evans, a 6-foot sophomore who transferred from Southside, concurred, beginning with life on the court.

“It’s a little different, but I think it’s better,” he said. “It’s an opportunity for scouts to come out and watch us. … The school has helped me with my grades. They’re even better than they were last year. And the traveling has helped me get ready for what college life is going to be like.”

Evans has attracted his share of attention, having already gathered scholarship offers from Clemson University and the University of Cincinnati.

Jackson said Furman, Western Carolina, Wofford and Jacksonville are interested in Gage Ellis, a 6-3 wing player who made the move from Greenville High (and has a 3.9 grade-point average to match his on-court ability).

Jeremiah West, formerly of Brashier Middle College, is a 6-0 junior who can “catch and shoot it with the best of them,” Jackson said.

Jackson, who also serves as the school’s athletic director and dean of students, admits his players are attending the school in hopes of gaining basketball scholarships.

Legacy beat Princeton Day on its way to the championship of the John Lucas Invitational in Durham, N.C., in December.

Evans has found the talent of Frazier and Carr to be the norm but their size to be an aberration.

“Just about everybody’s bigger than me,” Evans said. “It helps me a lot knowing that I’ve got a bigger person guarding me. That means I’ve got to use my speed or my jump shot a little more.”

Legacy, 16-8 after Tuesday night’s victory over Crossroads (N.C.) Charter High School, has both lack of size and lack of experience working against it.

“With most of my teams, I never had much size,” Jackson said. “But with the style of play we try to create — full-court, man, pressing and trapping — it helps alleviate the size situation.”

As for experience, the Lions’ 14-player roster consists of two freshmen, three sophomores and nine juniors. The school won’t have a senior class until next year.

That’s good news for Jackson, because he’ll have everybody back.

Plus, the players will have another year under their belts, and that should be good for them, because colleges have responded positively to the school’s operating procedures, Jackson said.

A student must achieve a score of 80 percent in order to receive credit in a class.

“(College coaches) know because of the 80 percent, (that players are) going to be qualifiers when it’s time for them to go to college,” Jackson said.

In addition, nutrition is a focal point. As the school’s web site professes, “Traditional use of the deep-fat fryer as a preparation method has been eliminated; instead, all hot foods are baked, broiled, steamed or grilled.”

And the health regimen doesn’t stop there for the players.

“We’re pushing the kids in the weight room,” Jackson said. “A full-time strength coach comes in every day and works them out during weightlifting class.

“Pretty much whatever we need, they’re providing.”