(CNN)LeBron James thinks the President is using athletics, and athletes, to split up the country. And he’s rejecting the premise like an opponent’s ill-advised layup.

“What I’ve noticed over the past few months,” James shared with CNN’s Don Lemon during a sit-down interview on Monday. “(Is) he’s kinda used sports to kinda divide us, and that’s something that I can’t relate to.”

Referencing Colin Kaepernick, whose kneeling protests during the pre-game national anthem launched an NFL movement, and more recently, Stephen Curry, who honored his promise of skipping a visit to Donald Trump’s White House, James bemoaned a myriad of instances in which the President has twisted peaceful displays of dissent into an indictment of a decaying American value system.

“I can’t sit back and say nothing,” said James, who lists participating in youth athletics as one of the most inclusive experiences of his upbringing. “Sports was the first time I was ever around someone white,” revealed the four-time NBA MVP. “I got an opportunity to see them and learn about them, and they got the opportunity to learn about me … And I was like, ‘Oh wow, this is all because of sports.'”

Flashing the trademark smile that has routinely graced magazine covers and commercial shoots since he was a junior in high school, James laughed at learning how much earlier his youthful “white friends” ate dinner and went to bed, and noted his surprise at seeing food stored in a pantry. “For me, everything where I grew up was on top of the refrigerator,” he explained.

Now a 33-year-old man, with two sons and a daughter, James has more pantries, and more refrigerators, than he’d ever dreamed of as the child of a single teen mom living the “everyday struggle” in Akron, Ohio. But it’s from this existence that the “I Promise School” has been born. 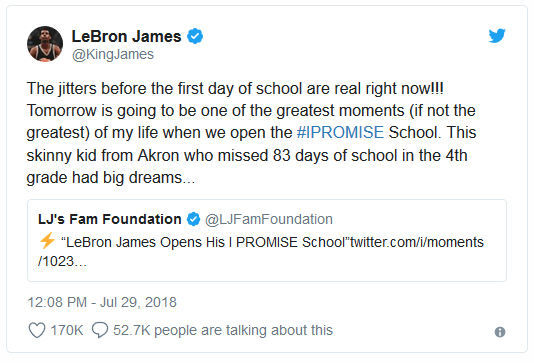 James’ foundation has teamed with the Akron (Ohio) Public Schools system to create an elementary school that will support at-risk children in his hometown.

“We want every kid that walks through this school to be inspired, to come … away with something, something where they can give back,” said James, who poured millions from his own pocket into the project. “For kids, in general, all they want to know is that someone cares. And when they walk through that door, I hope they know that someone cares.”

Asked by Lemon about the prospect of politics in his post-playing days, James moved right past it like so many defenders throughout his Hall-of-Fame career. Queried on what he’d say to Trump were the President positioned before him, and he’s quick to clarify “I would never sit across from him.”
But helping the next generation conquer certain obstacles, this is what has secured James’ full focus, with a nod to the past serving as his future model.

“If we look at some of the greatest leaders of our time, you look at, you know, Muhammad Ali, you look at Dr. Martin Luther King, and all the adversity they went through,” he told Lemon, as the pair sat in the very school the star helped construct. “They always use it to say ‘OK, this is even more motivation, this is even more a way for me to even be more powerful.’ And — and they’re the reason why we are here today.”