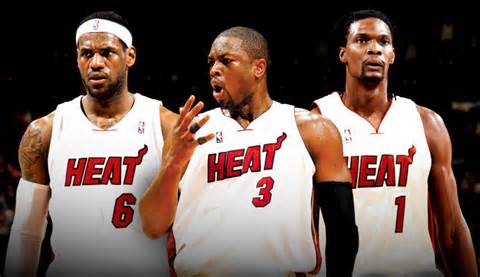 CHARLOTTE, N.C. —Forward LeBron James scored 31 points and four of his teammates scored in double figures as the Miami Heat beat the Charlotte Bobcats 109-98 on Monday night to complete a four-game sweep of their first-round Eastern Conference playoff series.

The Heat trailed at halftime but outscored the Bobcats 32-17 in the third quarter, closing the period with an 11-2 run. They never let the Bobcats get closer than seven in the fourth quarter.

It was the Heat’s 20th straight win over the Bobcats in the last four seasons, and it completed an 8-0 sweep this season.

The Heat, seeded second in the East, advance to take on the winner of the Toronto-Brooklyn series in the conference semifinals.

James was kneed in the thigh during a collision in the third quarter, but shrugged off the injury and finished 10 of 19 from the field and 10 of 12 from the free-throw line. He also had eight assists and six rebounds.

The Heat also got 17 points from center Chris Bosh, 13 each from guards Dwyane Wade and Norris Cole, and 10 from guard Mario Chalmers.

The Bobcats played without center Al Jefferson, their leading scorer and rebounder. Jefferson suffered a strained plantar fascia in his left foot in Game One and had been hobbled throughout the series.

For the Bobcats name, it was the final game in franchise history. The team will become the Hornets next season. The Bobcats never won a playoff game in their 10-year history, getting swept in both of their playoff appearances.