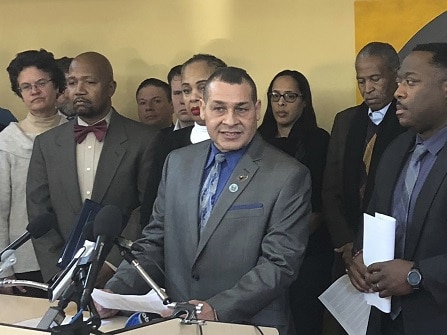 The suit claims the county’s police chief, Henry Stawinski, has allowed racism to “thrive” in his department since his appointment nearly two years ago. It seeks unspecified monetary damages, including punitive damages, as well as a court order requiring the county to abolish racial discrimination within its police department.

In October 2017, Stawinski said the Justice Department was investigating allegations that the department’s employment practices discriminated against Hispanics and blacks. At the time, Stawinski said he would cooperate with the federal investigation and end any “structures or practices” that negatively impact officers.

Police department spokeswoman Jennifer Donelan said Wednesday she can’t comment on pending litigation. The police department isn’t named as a defendant, but Stawinski and three other police officials are. The suit claims they have “perpetuated a long-standing pattern and practice of discrimination.”

Justice Department spokeswoman Kelly Laco said in an email that she can’t confirm or deny the “existence or nonexistence” of investigations.

However, one of the attorneys who filed the lawsuit said the federal investigation remains open. Investigators are interviewing officers “on a regular basis,” added Deborah Jeon, legal director for the American Civil Liberties Union of Maryland.

Police Capt. Joseph Perez, a plaintiff and president of Hispanic National Law Enforcement Association National Capital Region, claims he has been passed over for promotions because he has spoken out against discriminatory and retaliatory misconduct.

“The minute that you open up your mouth and say, ‘Hey, that’s wrong,’ guess what? You’re not a team player any more. You’re a snitch. You broke that blue wall of silence,” Perez said.

Dana Vickers Shelley, executive director of the ACLU of Maryland, said officers deserve praise and not punishment for blowing the whistle on racist policing practices.

“Any police department that fosters a culture of racial harassment and retaliation against officers of color within its ranks cannot hope to gain the community trust and support that is so necessary for achieving better public safety for everyone,” she said.

The suit claims three white officers repeatedly circulated racist text messages such as “we should bring back public hangings.” A complaint about the texts apparently didn’t lead to any investigation or discipline for the three officers, the suit adds.

In August, Stawinski apologized for a since-deleted Facebook Live video in which an officer speaking to children refers to a “black bad guy.” The officer, who was giving a K-9 demonstration, said police dogs could smell detect a person’s odor “if a black bad guy is running and drops” an item.

Perez said the officer’s remark on the video isn’t an aberration.

“We see that on the street from other officers,” he said.

In February 2017, Perez showed Stawinski copies of photographs of the black face and Afro wig that someone had placed on a training dummy, according to the lawsuit.

“Chief Stawinski subsequently denied seeing the photos prior to a later press conference,” the suit says.

The officers named as plaintiffs in the suit also are represented by the Washington Lawyers’ Committee for Civil Rights and Urban Affairs.