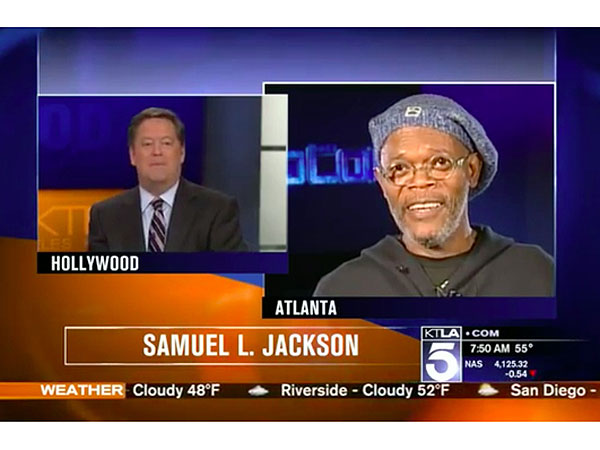 KTLA entertainment reporter Sam Rubin was interviewing Jackson on Monday morning about the film “RoboCop” when he asked the actor if he’d gotten a lot of reaction to his recent Super Bowl commercial.

When Jackson asked, “What Super Bowl commercial?” Rubin realized his mistake and began to apologize. But it was too late.

As Rubin, who is white, tried to apologize, a smiling Jackson went on at length, listing various black actors and their commercials. Video of the exchange quickly went viral.

“I’m the ‘What’s in Your Wallet,’ black guy,” he said of his own commercial for a credit-card company. “He’s the car black guy. “Morgan Freeman is the other credit-card black guy. You only hear his voice, though, so you probably won’t confuse him with Laurence Fishburne.”

Fishburne, as the character Morpheus from the “Matrix” movies, appeared in the Super Bowl commercial for Kia automobiles.

The pair eventually got back to talking about “RoboCop,” with Jackson telling Rubin how highly he regards Michael Keaton and Gary Oldman, who appear in the film with him.

“You do know who they all are though, right?” he teased. “Just in case they have some of them on the show. Do some work. Do some research. Make sure you don’t confuse them with those other white actors.”

When he returned to the air 30 minutes later, Rubin apologized profusely, saying he has interviewed Jackson several times and does indeed know who he is.

“I really pride myself on the fact that unlike a lot of people who do this kind of work, more often than not I really do know what I’m talking about,” he said. “But I didn’t 30 minutes ago and I’m really embarrassed about it, and I very much apologize to Samuel L. Jackson and anyone else who was offended for what was a very amateur mistake.”