Kym Whitley On Raising A Son: ‘You’ve Got To Keep Him Alive’
POSTED BY WLAS January 11th, 2015 0 COMMENTS 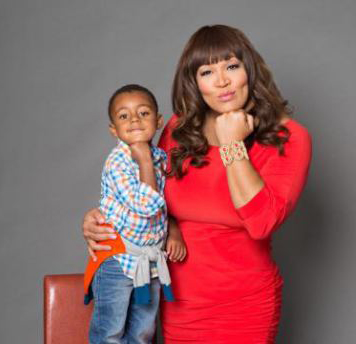 Kym Whitley is back on Raising Whitley, her OWN reality show. Her adopted son Joshua turns 4 today, marking not just his birthday but four years of Whitley’s journey as a mom, with the help of a her “village” – a group of friends that helps her manage the realities of single parenthood.

“We’re planning a party – all the villagers are pitching in, they’ve gone to the Dollar Tree and got their gifts. We’re still filming the season so we’re going to film the birthday party. It’s very exciting.”

Whitley says even after four years, she’s still getting the hang of parenting.

“You’ve got to keep them alive,” she says. “They don’t know danger. Then I found out you have to feed them three of four times a day. The biggest thing that really tripped me out, they should have when they called me from the hospital and said we have a baby for you, they should have said that you’ve got to get up at 7 and take them to school. I didn’t realize that.”

Whitley says that another challenge, especially in light of recent events, is raising a Black male to adulthood. Even with her support system and her resources, she still believes that something important is lacking.

“I have my village, but my brothers had my dad,” she says. “He knew how to talk to them and explain to them how you navigate this life and how you navigate being a child of color. That’s my fear, that I will have to navigate them and teach them how to put your hands up,” Whitley says.

“I don’t know. This little boy, I have to explain that he’s adopted. I got other stuff to explain. I remember the police chasing my brothers through the front yard up to the front door. My mother was light and they didn’t know she was a Black woman. They were like there’s a Negro child running through your yard until my Black daddy showed up behind her and little Black children. The policeman turned beet red and apologized and they sent a basket. It was a lot. That was my first time realizing it was a problem.”

Whitley, who remains single, says that she feels that it would be great to be with someone if she could find the right man. Despite the village she’s put together to surround Joshua, she feels like it would be great for both her and her son to find someone as long as they are the right person, not just someone to fill the void.

This season on the show, you will see Whitley interact with Joshua’s birth mother, a young woman Whitley mentored who gave her son up to Whitley at birth. As might be expected, this proves to be challenging for both of them and for the village.

Raising Whitley airs on OWN Saturday nights at 9 p.m.