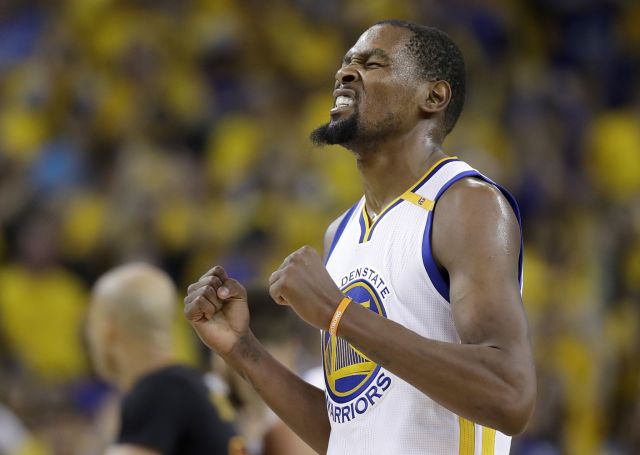 This is it. This is Kevin Durant’s best-case scenario.

This is why he suffered the slings and arrows, the derision that came with his decision to leave the Oklahoma City Thunder and join the Golden State Warriors in free agency — the best possible chance to not only win the first NBA championship of his career, but to do so in style, performing brilliantly throughout the playoff run and earning honors as the NBA Finals’ Most Valuable Player.

“In his 10th year in the league, he’s been a perennial All-Star,” said NBA commissioner Adam Silver. “He’s been the league MVP. But he’s never been the Finals MVP. Your Bill Russell 2017 Finals MVP: Kevin Durant.”

Durant received all 11 votes from the panel of media members who voted for this year’s Finals MVP award.

As he had all series, Durant shined in Game 5, pouring in 39 points on sparkling 14-for-20 shooting to go with seven rebounds, five assists and one steal in 40 minutes of floor time. His peerless shooting and scoring skill pushed the Warriors over the top, allowing Golden State to finish the Cavs off on Monday despite a tough loss in Game 4 in Cleveland on Friday night.

“I couldn’t sleep for two days,” Durant told ABC’s Doris Burke on the court after the title victory. “I was anxious, I was jittery. I just wanted to lay it all out there. I put in work. I just had to trust in it.” 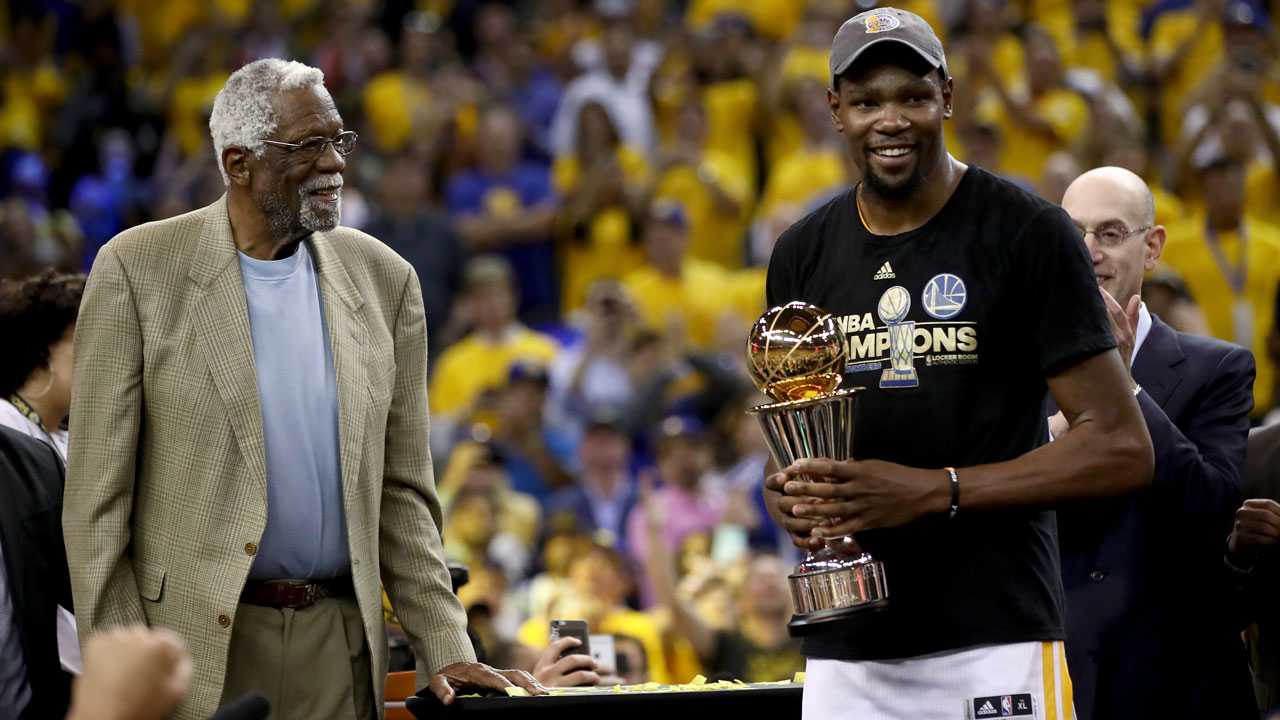 Durant became the first player since Shaquille O’Neal in 2000 to post five straight 30-point games in an NBA Finals series, averaging 35.2 points per game on 55.5 percent shooting from the field, 47.4 percent shooting from 3-point range, and a 92.7 percent mark from the free-throw line. He went toe-to-toe with LeBron James, the man who handed Durant defeat in his first Finals appearance back in 2012. Despite a mammoth series from James, this time, Durant came out on top, joining Michael Jordan and Wilt Chamberlain as just the third player in NBA history to win four scoring titles and an NBA championship. 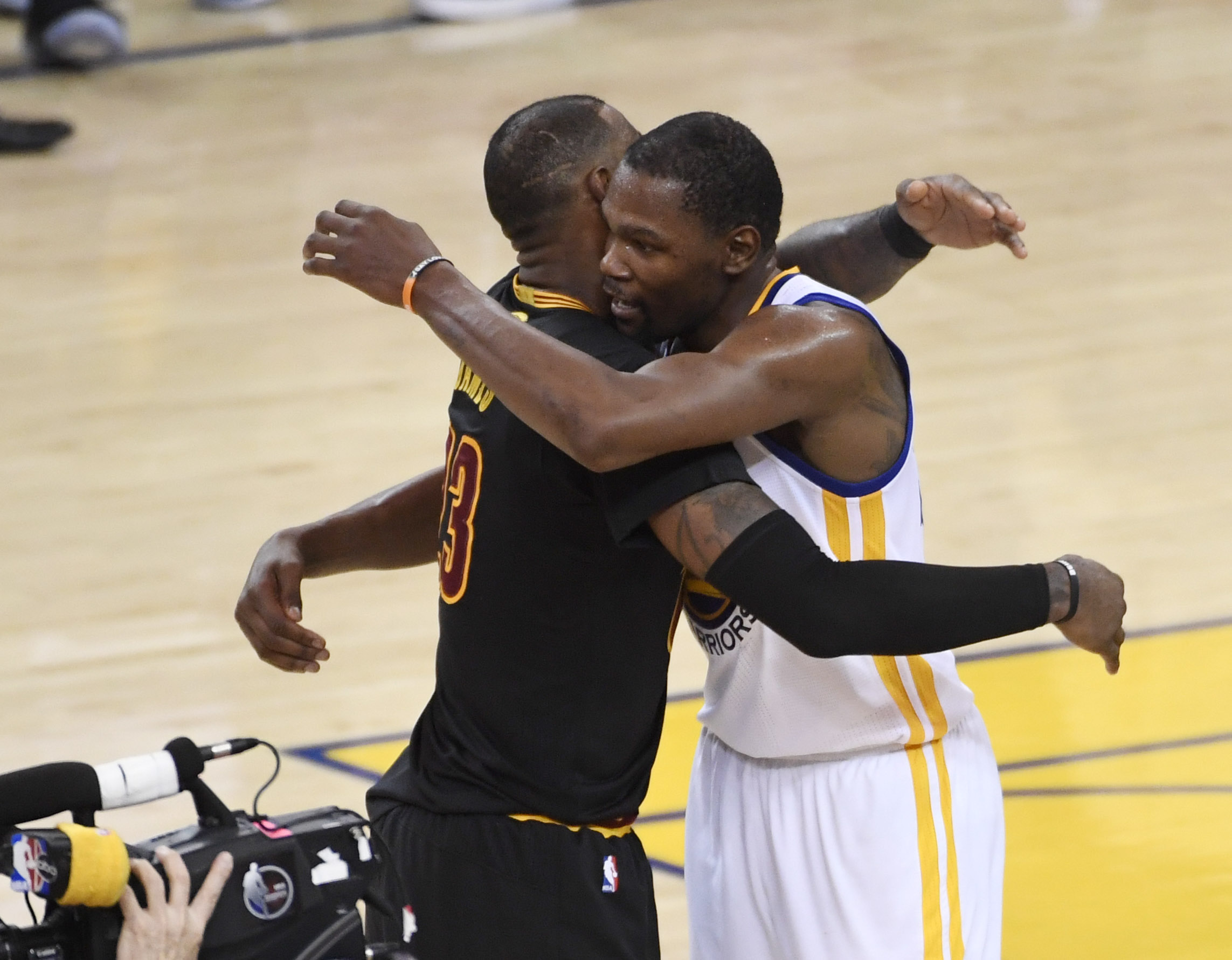 “He’s the only person that I was looking at since 2012,” Durant told Burke. “He’s the only one I looked at and said, ‘He’s the only guy who could look me eye-to-eye.’ I knew it was going to be a battle. I just tried to challenge him. He averaged a damn triple-double, man. You can’t stop the guy. But we battled.”

And with the Warriors and Cavaliers both looking poised to retain their spots atop their respective conferences, that battle might just be getting started.

“I told him, ‘We tied up now,’ and we gonna try to do this thing again,” said Durant, who joined Magic Johnson (1980) and Moses Malone (1983) as the third player in NBA history to win Finals MVP in his first year with his new team. “But I’m gonna celebrate this one tonight.”

Durant celebrated his first title and his first Finals MVP award with his mother, Wanda Pratt, who held him as he cried in the tunnel after his Thunder lost the 2012 Finals to James’ Miami Heat, and whom he famously referred to as “the real MVP” during the ceremony honoring his work in winning the 2014 regular-season award. After the final buzzer sounded, they embraced on the court … 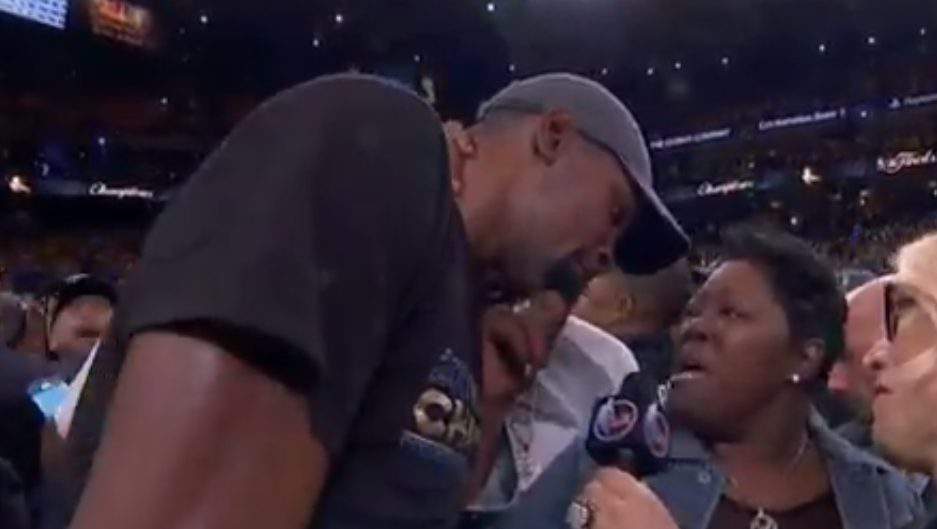 … and just before his chat with Burke, Wanda held his chin, looked him in his eye and repeated, “You did it. You did it.”

“She’s seen me as a kid, putting in work,” Durant said. “She’s seen how I come home after losses, how tough I take it. She’s been there with me — my brother, my family, my dad, my godfather, man. Everybody in Seat Pleasant. Everybody in P.G. County, Maryland. Everybody in D.C., Virginia that’ve been riding with me. It feels good, man, to see it come full circle. So I’m gonna enjoy it.”