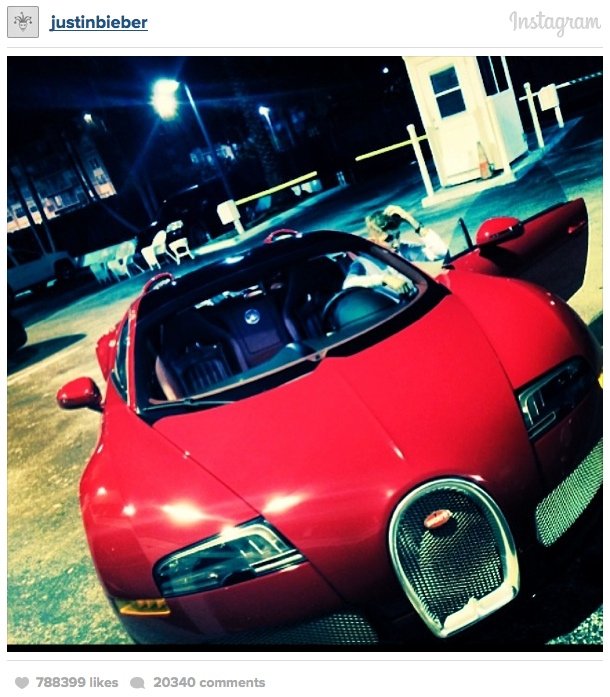 Stop right there. Just stop. Don’t go pretending that, if suddenly presented with the surprise gift of a $1.9 million, 1,000-hp Bugatti Veyron Grand Sport, you would somehow suffer a spasm of social consciousness and swap the keys for a Nissan Versa instead. We all know that after the hyperventilation and shock wore off, the first stop would be a social media outlet with a photo and some gratitude — just like Justin Bieber did today with his new Veyron.

Bieber presented the car to his Instagram followers today with the note: “Uncle Stunna luv. My first Bugatti #generosity.” For those not skilled in Bieber-speak, “Uncle Stunna luv” refers to Bieber’s producer Birdman, himself a known aficionado of the Bugatti Veyron, and with whom Bieber has been working in recent weeks on new music.

The 20-year-old singer has been known as much for his exploits behind the wheel in recent years – from the January DUI arrest in Miami while driving a rented Lamborghini to driving without a license and generally doing the things that make people dislike 20-year-old pop stars. His personal garage has included three Ferraris and a Fisker Karma, which a compatriot wrecked.

You might think Bugatti itself would be less than thrilled with the surprise; the branch of Volkswagen pitches its cars as the rides of billionaires (how else to justify the $50,000 price of getting a new set of tires, which are made only for the Veyron to reach its 250 mph top speed?) But of the 150 Veyron Grand Sports it’s built since 2009, Bugatti still has a few dozen left to sell before it can get the OK to build a new model. Even for the wealthiest people on the globe, a 16-cylinder handmade car can seem like an overindulgence. For them, it’s too much — making it the perfect ride for the spotlight-seekers. Maybe it’s Bugatti who ought to be grateful for the exposure; after all, no one ever made much fuss over pink Cadillacs until Elvis sang about it.