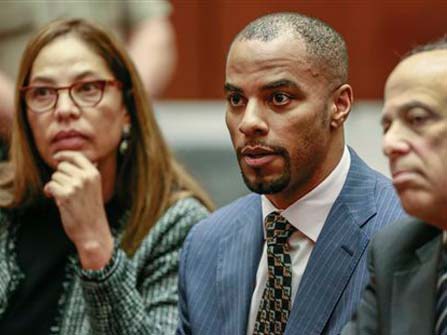 NEW ORLEANS (AP) — A federal judge rejected a plea deal Thursday in the rape case against former NFL star Darren Sharper, saying the nine-year sentence doesn’t reflect the seriousness of the alleged assaults against as many as 16 women.

“This court cannot accept this plea agreement,” U.S. District Judge Jane Triche Milazzo told Sharper as he stood before her in orange prison coveralls and shackles. She gave Sharper and his lawyers until March 3 to decide whether to withdraw a guilty plea he entered last year.

Sharper had pleaded guilty as part of a deal involving charges in four states. He also has pleaded guilty or no contest to similar charges in state courts in California, Arizona, Nevada and Louisiana. He was sentenced to eight years in Arizona but awaits formal sentencing in the other jurisdictions.

His attorneys declined comment as they left the courtroom.

Sharper’s federal plea deal called for a 108-month prison sentence if he were to comply with a lengthy list of requirements, including cooperation with authorities in the case against two co-defendants in Louisiana.

Milazzo noted a pre-sentence report compiled by federal authorities and federal sentencing guidelines that called for a sentence between 15 to 20 years.

The federal indictment charged Sharper with distributing the drugs alprazolam, diazepam and zolpidem — more commonly known by the brand names Xanax, Valium and Ambien — with the intent to commit rape.

Two Louisiana state counts of aggravated rape against Sharper stemmed from accusations that he sexually assaulted two drug-impaired women at his apartment in September 2013.

Sharper was selected All-Pro six times and chosen for the Pro Bowl five times during a career that included stints with the Green Bay Packers and Minnesota Vikings. He played in two Super Bowls, one with the Packers as a rookie and one with New Orleans Saints when they won in 2010.

He ended a 14-year career in 2011. He was working as an NFL network analyst when women began telling police in several cities similar stories of blacking out while drinking with him and waking up groggy to find they had been sexually abused.