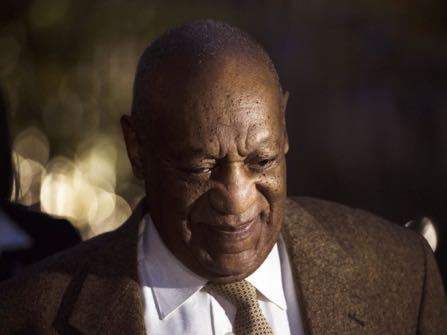 Bill Cosby chose fellow comedians Joe Torry and Lewis Dix as his personal escorts for Day 4 of his sexual assault trial in Pennsylvania.

On Wednesday, actress Sheila Frazier and her hairstylist husband, John Atchison, showed up with the comedian. Earlier in the week, it was his TV daughter Keshia Knight-Pulliam on his arm.

Curiously absent from Cosby’s side so far is his wife, Camille.

Cosby, 79, is charged with aggravated indecent assault and could spend the rest of his life in prison if convicted. He has said the sexual encounter at his suburban Philadelphia home in 2004 was consensual.

Rodman-Conare, who lived next door to Constand at the time, said that on occasion he was present when Cosby would call her. While he described Constand as an open, natural, and easygoing person, he said she eventually became distant.

Meanwhile, Schaffer was assigned the case January 18, 2005. On January 26, he traveled to New York City to interview Cosby as part of the investigation. Quotes from that interview were introduced in court on Thursday.

Asked by police if he ever had sex with Constand, Cosby replied: “Never asleep or awake.”

“I never intended to have sexual intercourse, like naked bodies, with Andrea. We are fully clothed. We are petting. I enjoyed it. And then I stopped, and I went up to bed,” he said, according to his statement read to the jury.

Cosby also told police that Constand showed no ill effects from the 1 1/2 Benadryl tablets he says he gave her, and never objected to his behavior. The TV icon said they had been romantic before.

After the interview was over, Schaffer testified Cosby summoned his driver who brought up a bag of pills – Cosby gave police 1 ½ pink oblong, a round green pill and a smaller white pill, which were tested in 2015. The test results were not revealed.

Meanwhile, most of Wednesday’s session was taken up by the defense’s cross-examination of Constand, who directed the women’s basketball team at Cosby’s alma mater, Temple University, where he was a trustee. She says Cosby fondled her breasts and genitals after drugging her at his suburban Philadelphia home in January 2004.

She also testified that Cosby penetrated her with his fingers against her will after giving her pills that left her so limp and foggy that she was unable to push him away or tell him to stop. She denied they had a previous romantic relationship and said she had rebuffed his previous sexual advances.