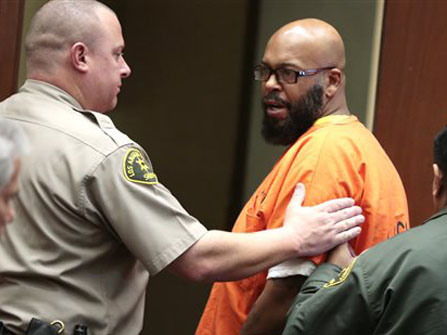 LOS ANGELES (AP) — On paper, the evidence in the murder case against Marion “Suge” Knight looks strong: Prosecutors have a surviving witness, video of the former rap music mogul running over two men and Knight’s history of violence and intimidation.

But a hearing this week that ended with a judge ordering Knight to stand trial showed the difficulty prosecutors will face if they hope to convict the Death Row Records co-founder. The witness says he doesn’t want to testify and be labeled a “snitch” and won’t even identify Knight as the one who ran over him. The video is fuzzy and has elements that could help either side.

And Knight is not the only one involved with a shady past.

Cle “Bone” Sloan, the man who survived the crash, is a former gang member, and Knight has ties to the Mob Piru Bloods, a gang that helped him maintain a fearsome image during the heyday of Death Row Records. Experts say witness issues are common in prosecutions involving gang members.

Meanwhile, Knight’s defense attorney used the video to show that several men with gang affiliations hired by Sloan for work on the film “Straight Outta Compton” were at the scene, when they should have been several blocks away preparing to shoot a promo video.

Sloan made clear that he is a reluctant witness. Such behavior is common in cases involving gang members, in large part because testimony can mean physical harm or death for someone seen as a snitch.

“That is the hallmark of a gang case,” said Alan Jackson, a former Los Angeles prosecutor who has written guidelines used nationwide in gang prosecutions.

“Although it’s a very daunting situation to be confronted with, it’s one that can be overcome,” Jackson said. “It’s usually overcome by the prosecutor explaining to the jury through a gang expert what these rules of the street are.”