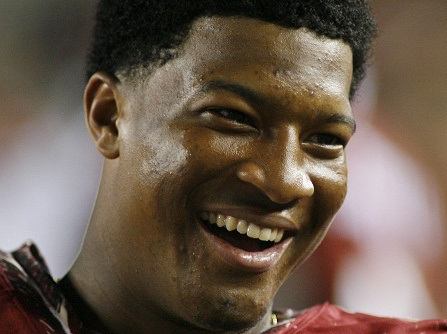 TALLAHASSEE, Fla. (AP) — Heisman Trophy winner Jameis Winston was issued a civil citation after sheriff’s deputies said he walked out of a supermarket without paying for $32 worth of crab legs and crawfish.

The 20-year-old Florida State quarterback said he forgot to pay for the food. The offense was relatively minor but drew attention both because of his stature and because it was his latest brush with the law. Winston had been the subject of a much more serious, monthslong investigation into allegations that he had sexually assaulted a woman in December 2013. A prosecutor declined to charge him, citing a lack of evidence and gaps in the accuser’s story.

Leon County Sheriff’s Maj. Michael Wood said Wednesday that Publix employees called deputies, who went to Winston’s apartment about three hours later. Winston was cooperative and told the deputies he forgot to pay for the food, but he did not contact the store or return there to pay for the items, Wood said.

“The facts are not in dispute,” Wood said. “He left without paying.”

Winston issued a statement through his lawyer saying he had intended to pay, “but made a terrible mistake for which I’m taking full responsibility. In a moment of youthful ignorance, I walked out of the store without paying for one of my items.

“I realize that I am in the public spotlight and my conduct needs to be above reproach.”

The 6-foot-4, 235-pound Winston led Florida State to an undefeated season and national football championship. For the season, he passed for more than 4,000 yards and 40 touchdowns, completing nearly 67 percent of his throws.

Although Winston was cleared in the sexual assault case, the university is facing a federal investigation into how it handled the woman’s accusations.

The investigation lagged for months after Tallahassee Police Department officials said they were told the accuser wanted to drop the case, but the woman’s lawyer denied that. The accuser’s lawyers have said the police department botched the investigation because detectives didn’t quickly identify possible witnesses or obtain surveillance tape from the bar where the victim says she was first approached by Florida State football players.

Winston also has had two other run-ins with police, though he was not charged in either case.

In November 2012, police were called to an apartment complex in which 13 windows had been damaged by BB guns. Winston and his roommate at the time said Florida State players were engaged in a series of “battles” with each other, although they denied shooting BB guns themselves.

In another incident, police records show Winston came into a Burger King with three men but did not order food, instead asking for a water cup he repeatedly filled with soda over an employee’s objections. The report says Winston was never interviewed about the incident because the restaurant declined to prosecute.