Have T.I. And Tiny Called It Quits For Real This Time?
POSTED BY WLAS October 13th, 2014 0 COMMENTS 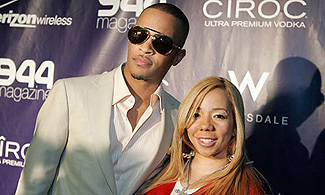 It’s been rumored for a while that T.I. and Tiny haven’t been together for a while, but the couple always denied it. But there are new reports that they are indeed broken up.

T.I.’s cousin spilled the beans that he had a baby outside of his marriage recently, even though Tiny shot down that rumor in an interview with Hello Beautiful. T.I. also moved out of their house months ago and bought a house closer to his studio.

Let’s not forget about the whole debacle of that Tiny and Floyd Mayweather business. T.I. and Mayweather fought at a fast food restaurant back in May over claims that the ex-Xscape singer slept with the boxer.

But now, it looks like they are only keeping up the charade of being married for the sake of their VH1 show, “T.I. and Tiny Family Hustle.” But if you look closely at the aired episodes from the latest season, you’ll see that they haven’t filmed any of their scenes together which is quite odd.

We’ll see if there’s any truth to the breakup. Not filming together is very telling.