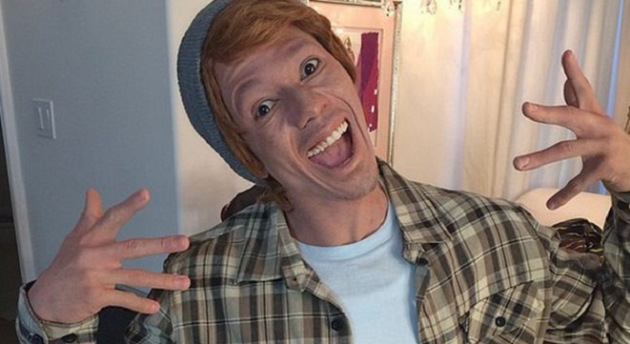 Ever heard of Connor Smallnut?

If you haven’t, get ready.

Connor Smallnut is the white character Nick Cannon is using as a stunt vehicle to promote his new album titled, “White People Party Music.” Cannon introduced the character on social media with photo writing, “It’s official… I’m White!!! He then followed up with #WHITEPEOPLEPARTYMUSIC #Wppm in stores April 1st!!!!!! Dude Go Get It!!! Join The Party!!!!

And finished with the quote, “Bro I got drafted!!”

Cue the backlash and faux outrage.

On Twitter someone wrote, “Kind of funny how Nick Cannon can put some makeup on and pretend to be white, but if that was reversed and a white person did it’s “racist.”

Another person wrote, “So Nick Cannon can put on white face and be considered hilarious. I put on black face and get called racist. Sweet haha #doublestandards.”

Yes, it is a double standard, and rightly so. Why? Very simply- because of slavery, because of Jim Crow, because of segregation. Because blackface was created to mock a group of people who had no power and to further stereotype them as animals, as monkeys and as less than human. Blackface was used as a way for white people to get jobs by performing as offensive representations of black people. Real black people never got the jobs. They just hired white people in blackface.

There are just some things you just don’t do- and without saying- everybody understands why. White people should never dress in blackface (Julianne Hough) just as NOBODY should ever dress as a Nazi or Hitler (Prince Harry). It’s just not funny.

And so far the person who has explained it better than any scholarly article I’ve read on the subject thus far, is none other than Howard Stern,“Who cares? No one. Why? Because we don’t have a history of white people being subjugated to slavery, whippings, hangings. It is a completely different thing and it is a double standard. And everyone who is complaining about it…he’s a racist. You’re the racist. You know you are. You’re just looking to pin it on him.”

Stern ended by saying if you don’t understand it, you’re a moron.