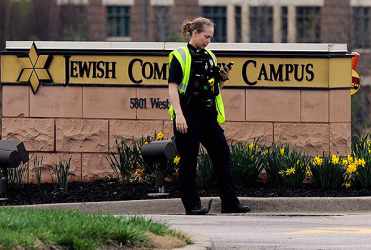 OVERLAND PARK, Kan. (AP) — A gunman opened fire outside of a Jewish community center on Sunday, killing a doctor and his teenage grandson before heading to a Jewish retirement community a few blocks away and killing someone else, authorities said.

Police arrested the suspected assailant in an elementary school parking lot shortly after the attacks in the Kansas City suburb of Overland Park.

At a news conference, the city’s police chief, John Douglass, said the suspect is in his 70s, wasn’t from Kansas and wasn’t known to area law enforcement. He also said there was no indication that the suspect knew the victims.

“Today is a sad and very tragic day,” Douglass said. “As you might imagine we are only three hours into this investigation. There’s a lot of innuendo and a lot of assertions going around. There is really very little hardcore information.”

Douglass declined to release the names of the victims, citing the need to notify their loved ones first. But the family of the first two people who were shot released a statement later Sunday identifying them as Dr. William Lewis Corporon and his 14-year-old grandson, Reat Griffin Underwood. They were both Christian, and the family thanked members of their church congregation, among other people, for their support.

“We take comfort knowing they are together in Heaven,” the family said. It asked for privacy to mourn.

Rebecca Sturtevant, a spokeswoman for Overland Park Regional Medical Center, where Reat was taken and where he died, said family members said Corporon and the boy were at the community center so that the high school freshman could try out for KC SuperStar, a singing competition for students.

Douglass said the suspect made several statements to police, “but it’s too early to tell you what he may or may not have said.” He also said it was too early in the investigation to determine whether there was an anti-Semitic motive for the attacks or if they will be investigated as hate crimes. The Jewish festival of Passover begins Monday.

Douglass said the suspect first opened fire in the parking lot behind the Jewish Community Center of Greater Kansas City. Corporon died at the scene and his grandson later died at the hospital. The chief said the suspect then drove to the nearby retirement community, Village Shalom, where he shot and killed a woman or girl. The gunman also shot at two other people during the attacks, but missed them, Douglass said.

Douglass said a shotgun was used in the attacks, and that investigators are also trying to determine if a handgun and assault-style rifle may also have been used.

Police officers were also sent to other Jewish facilities in the area immediately after the shootings, the police chief said.

“Immediately when we learned we had an active shooter we dispatched vehicles to secure and surveil all the active Jewish facilities in the city and other religious institutions which are not Jewish,” Douglass said.

The suspect was taken to the Johnson County Detention Center. Johnson County District Attorney Stephen Howe, who attended the news conference along with Barry Grissom, U.S. Attorney for Kansas, said it was too soon to know when the suspect would appear in court.

Corporon, who was a family doctor, leaves behind a wife of 49 years. His grandson, Reat, was an Eagle Scout who loved camping and hunting with his grandfather, father and brother, the family said.

President Barack Obama released a statement expressing his grief over the attack, and Kansas Gov. Sam Brownback vowed to bring those responsible to justice.

“My heart and prayers are with all those who were affected by today’s events,” Brownback said in a statement. “We will pursue justice aggressively for these victims and criminal charges against the perpetrator or perpetrators to the full extent of the law.”

Michael Siegal, chair of the Jewish Federations of North America, also said in an emailed statement that “no community should have to face a moment such as this one.”

“Today, on the eve of Pesach, we are left to contemplate how we must continue our work building a world in which all people are free to live their lives without the threat of terror,” he said.